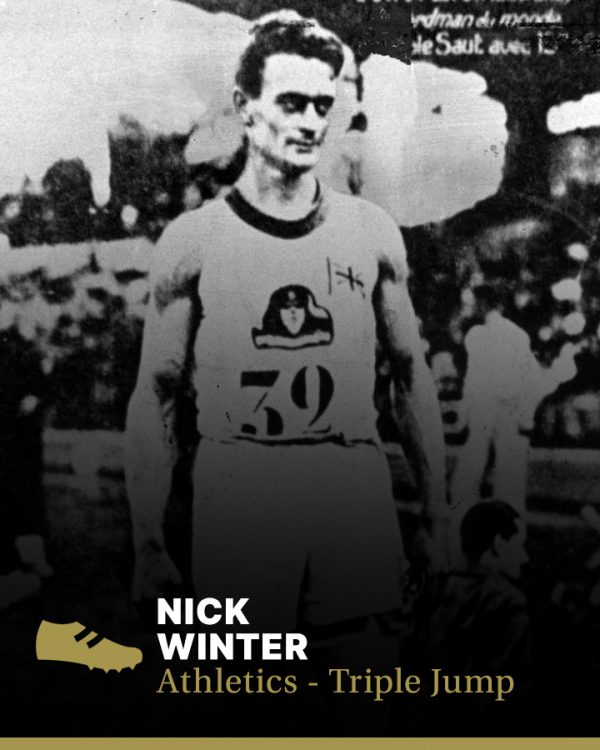 Nick served in the First World War as a light horseman and ended the war as a driver before competing in the 1924 Olympics.

Winter was the last person chosen for the 1924 Games, most likely because at 29, he had had no international competition. Although he had established an Australasian record of 14.5m in the running hop step and jump (or triple jump as we know it today), his experience was limited to club competition. The triple jump had not at that time even been included in Australian championships.

Winter became Australia’s first gold medallist in a field event by winning the hop step and jump with a world record leap of 15.5m. The record had stood since 1911. So great was the competition that the first five place getters all beat the previous Olympic record. The sports writers who covered the competition wrote about it for years afterwards.

The 37 competitors in Paris for the event were divided into two pools, and Winter was drawn against the favourite, Argentinean Luis Brenetto. After Brenetto leaped 15.42m, beating the Olympic record, Winter fouled his first attempt, overstepping the mark. With his second leap he covered 15.19m, also inside the old record. He fouled again on his third jump, but his one good performance was enough to carry him through to the final.

With his first jump in the final, Winter equalled his first round performance, with his second he covered enough ground to win, but fouled again and bruised his heels badly. So great was the pain that he had to remove his track shoes. Winter’s third and final jump of the final was the last of the competition. He was still behind Brenetto who had been unable to improve on his first round distance. Having fouled three times in five jumps, Winter decided to make a certainty of a valid jump by taking off inches before he reached the board. He cleared a massive 15.52m, a greater distance than any man had covered before. In breaking a world record that had stood for 13 years, Winter had improved on his pre-Olympic best performance by 14.5in. An Australian did not better this leap until 1960 when Joe Baguley from Western Australia jumped further.

As late as 1952 Winter’s jump would have earned him a silver Olympic medal and even in 1973 it would have won for him the Australian championship. Astonishingly, the gold medalist at the London Olympics in 1948 jumped shorter than Winter did in Paris 24 years earlier.

Winter’s was one of three gold medals won by Australia at the 1924 Olympics. All three, Winter, the swimmer “”Boy”” Charlton and the diver “”Dick”” Eve… came from the harborside suburb of Manly, where Winter was a member of the fire brigade.

Winter competed again for Australia in the 1928 Amsterdam Olympics, where he qualified for the final but did not jump near his best, placing 6th. Even the mark set by the third placegetter in Paris would have won in Amsterdam.

He was also the pioneer of the Australian triple jump, winning the national title in 1930 with a jump of 14.4m, the fist year it was listed as an Australian championship event. The following year Nick came second with a jump of 14.34m. Nick also competed in other field events including the pole vault, discus, javelin, and decathlon. Nick retired in 1931.