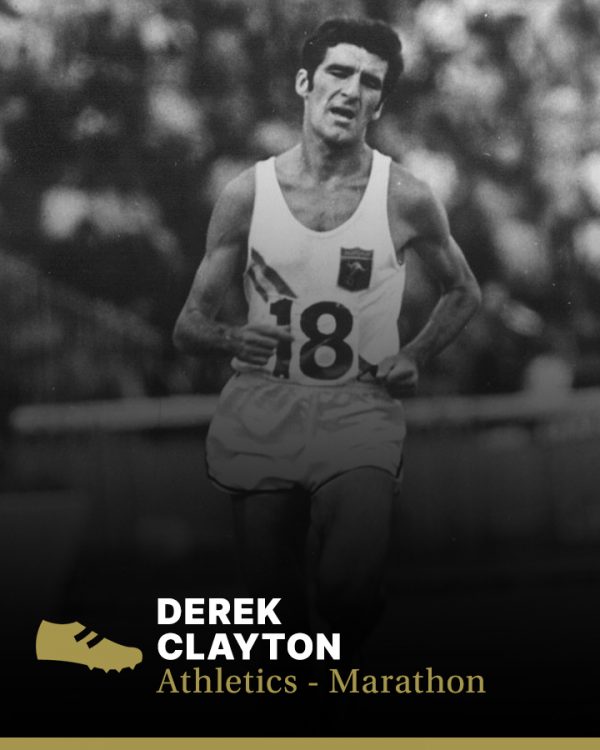 Derek Clayton was inducted into the Sport Australia Hall of Fame in 1999 as an Athlete Member for his contribution to the sport of athletics.

Born in Lancashire (UK), and raised in Northern Ireland, Clayton made his impact on Australian running in the late 1960s and early 1970s. Completely self-trained, he was renowned for his dogged determination and preparation, sometimes running up to 200 miles a week.

In 1967, Clayton made his mark on running history, winning the Fukuoka Marathon in Japan in the world record time of 2 hours 9 minutes and 36 seconds. It was the first marathon race ever run in less than two hours and ten minutes. This time was below the previous record by two and a half minutes -a formidable achievement. But there was more to come. In Antwerp, Belgium in May 1969, Clayton bettered his own world record by over one minute, running a time of 2 hours, 8 minutes and 33 seconds. It was a supreme achievement that held sway as the best marathon time for over 14 years.

Clayton represented Australia at the 1968 (Mexico City) and 1972 (Munich) Olympic Games, finishing 7th and 13th respectively -a sound effort given that his tall, strong build was not necessarily suited to the summer conditions of marathon running. Following a relatively short ten year running career, Clayton retired in 1974. He left behind him international running achievements that have had an impact on future marathon runners ever since.

After his retirement, Clayton continued to maintain a high level of fitness and is a current masters competitor, participating in both cycling and golfing events in the World Masters’ Games in Brisbane and the 1995 and 1997 Australian Masters’ Games in Melbourne and Canberra.

Clayton was Deputy Chairman of the 1995 Australian Masters’ Games and was Chairman of the Melbourne Marathon from 1994 to 2000. He is a current board member of the Victorian Institute of Sport.