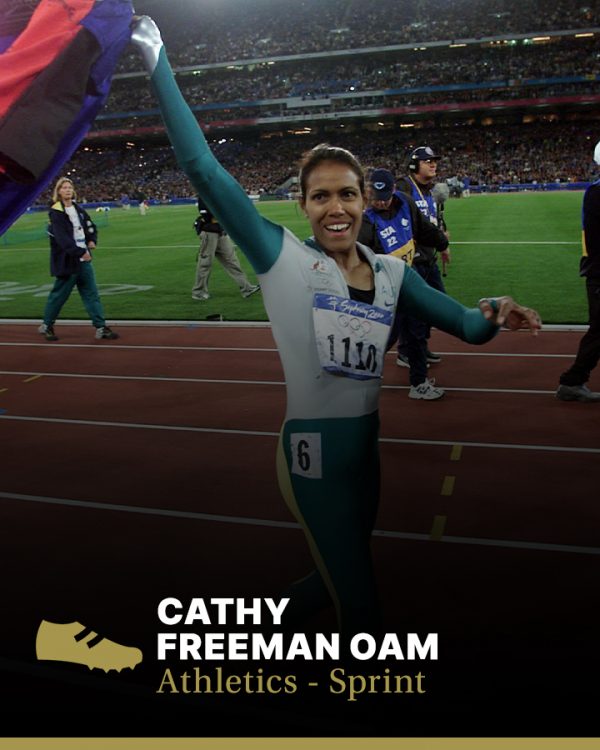 Catherine Freeman OAM was inducted into the Sport Australia Hall of Fame in 2005 as an Athlete Member for her contribution to the sport of athletics and was elevated as a Legend of Australian Sport in 2011.

Catherine’s role in the Sydney 2000 Olympic Games embedded her name forever in Olympic history. She lit the cauldron in the Olympic Stadium – after the torch had been handled by six Australian women, who had between them won 15 gold medals – in an Opening Ceremony that celebrated both a century of women’s participation and the heritage of indigenous Australians. Eleven nights later she fulfilled a mission that had absorbed her life: she won the 400m final (49.11), and claimed Australia’s 100th gold medal. The weight of expectations she carried into that race was enormous. Apart from the hopes of a nation, there was an extra load – 400yds of history. Fourth out of the blocks, she appeared to catapult herself clear of her rivals in the straight. Later she danced through a victory lap, carrying Australian and Aboriginal flags. Not since 1964, when Betty Cuthbert was successful over the same distance in Tokyo, had an Australian woman won a flat race on the track at the Games.

She finished the Games with a seventh in the 200m final, and ran a great anchor leg (49.35) for the Australian 4x400m relay team, finishing fifth in a new Australian record time.

After taking a break from athletics after the Games, Catherine competed in the 2002 Commonwealth Games in Manchester, in the 4x400m relay. In a thrilling finish to the athletics program, the women’s team of Lauren Hewitt, Freeman, Tamsyn Lewis, and Jana Pittman ran a sensational race, crossing the line in a new Games record of 3:25.63 for gold.

Catherine had immense pressure on her in the lead up to the race final, not only from the Australian media and public but also on a political and personal level. Reconciliation, court battles and the secret surrounding the lighting of the Olympic Cauldron were all issues she had to deal with in the lead up to the Games. Her ability to remain focused on the race despite this pressure and at the same time remain true to herself and her values is the reason why Catherine won the Don Award in 2000.