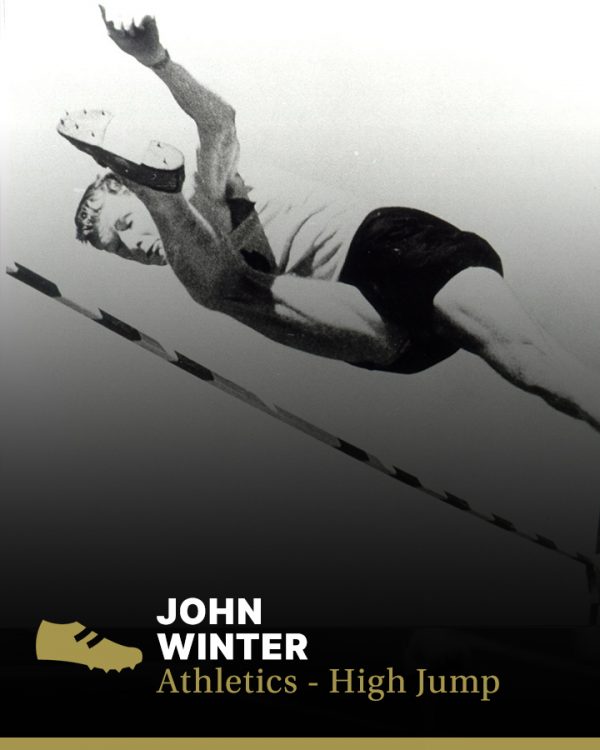 John Winter surprised the world at the 1948 London Olympic Games by becoming the first (and only) Australian ever to win an Olympic high jump gold medal. His leap of 6ft 6in while not as high as had been expected for the gold, was a triumph for coolness and composure under pressure.

Winter learned much of the sport of high jumping by watching films. He was one of the last international jumpers to use the eastern cut-off and had jumped 6ft 7½in before he went to London for the Games. At a height of 6ft 4in and weighing 12½ stone, he was of perfect build for high jumping.

In 1941, at the age of 16 he had cleared six feet while competing for Scotch College in Perth, Western Australia. In pre-Games training in 1948, Winter won the British title with a leap of 6ft 4in and the Irish championship with 6ft 6in.

At the time the Olympic record, set in Berlin, was 6ft 8in and the world record was 6ft 11in. The Americans had team members who had cleared 6ft 8in and it was felt that in Olympic competition they would reach even higher. The US team did not rate Winter as a danger.

By the time the bar in the Olympic event was raised to 6ft 6in, two Americans, a Frenchman, a Norwegian and Winter remained in the event. At that height all except Winter failed. Jumping with a ricked back (suffered during an earlier leap) and during a storm of applause (for Emil Zatopek’s 10,000 metres victory), Winter cleared the bar at this first attempt.

John Winter was appointed captain of the British Empire team to compete against the USA at White City after the Olympic Games. He again cleared 6ft 6in to win the high jump.

Winter jumped the same height to win the 1950 Auckland British Empire Games gold medal. He retired 10 months later, at the age of 27.