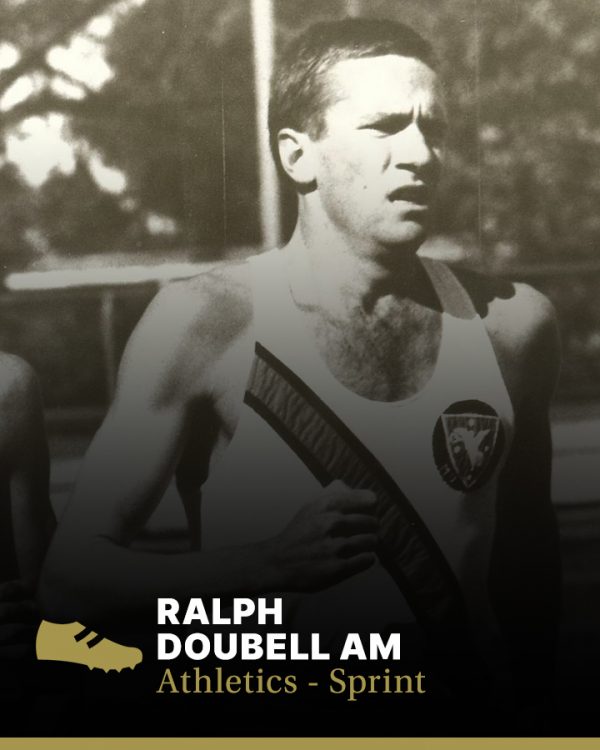 Born in Melbourne, Ralph Doubell had a relatively short international athletics career, but he managed to reach his peak at just the right time and in just the right place – an Olympic Games final.

When Doubell won the 800m at the 1968 Mexico City Games he became the first Australian to win over that distance since Edwin Flack 72 years before. The time he ran, 1min 44.4sec, equalled the 1962 world record set by New Zealand’s Peter Snell; it still stands as the fastest by an Australian.

Doubell was a comparatively late starter in athletics, having run his first half-mile at the age of 17 at Melbourne High School. As a student at Melbourne University, Doubell competed in an intervarsity championship in Adelaide, and in the course of doing so, realised that athletics might provide him with a means for travel, otherwise unavailable to a poor student. He returned to Melbourne and approached legendary Austrian-born coach Franz Stampfl, the coach at the University, signalling the beginning of a unique and successful partnership.

Doubell’s first major international victory in the 800m was at the 1967 World Student Games in Tokyo, in a time of 1:46.7, and followed that with a successful indoor circuit season in the United States. His next season (the Olympic season) was severely curtailed by achilles’ tendon injuries, and he was unable to compete for six months prior to the Mexico Games, where the favourite was Kenyan Wilson Kiprugut.

Doubell showed huge mental toughness during his passage to glory in Mexico City. After winning both his heat and the semi-final, he and Stampfl were convinced the final would be a race between him and the Kenyan – a classic match between a front runner and a kicker.

For Doubell the race went exactly to plan – Kiprugut went out early, aiming to lead all the way. Doubell kept within contact, although around seven metres behind, and swept past in the last 50 metres. That memorable moment made Doubell just the third Australian male ever to win an Olympic gold medal on the track – after Flack and Herb Elliott. Nobody has since joined the trio.

Doubell also competed at the 1966 Kingston (Jamaica) British Commonwealth Games and finished sixth in the 880yds. He had the same result at the 1970 Edinburgh Games. At the 1969 Pacific Conference Games he won the 800m in 1:48.0.

In 2006, Doubell was made a Member of the Order of Australia (AM) for services to athletics through administrative roles, particularly with Athletics New South Wales, and as a competitor.