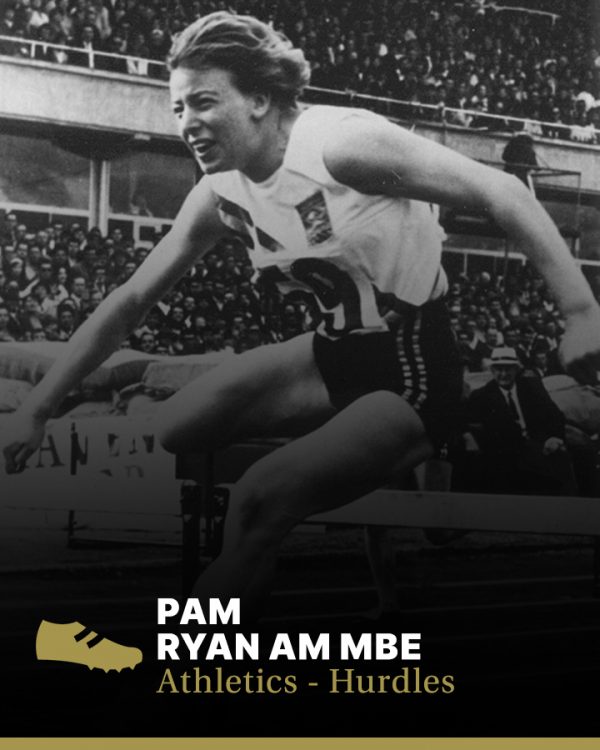 Pam Ryan AM MBE was inducted into the Sport Australia Hall of Fame in 1985 as an Athlete Member for her contribution to the sport of athletics.

Ryan (nee Kilborn) one of the world’s best athletes during the 1960s and early 1970s. She won three consecutive Commonwealth Games hurdles titles and set national records in nine events.

Arriving on the scene in the late 1950s, Ryan competed in Victorian inter-club events and, although she did not have immediate success, was chosen to represent the state in the 1959/60 Australian championships. Keen to make the 1960 Rome Olympic team, Ryan was unlucky to be unwell during the nationals and only managed to finish third in 11 seconds in the 80m hurdles final behind world record holder Norma Thrower and Olympic finalist Gloria Cooke. Ryan was so sick after the hurdles final that the place getters had to help her stand on the medal dais.

Ryan was chosen for both the 80m hurdles and long jump events at the 1962 Perth British Empire and Commonwealth Games, winning gold in both events. She won the hurdles by an impressive four metres in 10.9 seconds and later in the afternoon won the long jump with 6.268 metres, her career best. For the next ten years Ryan was considered one of the world’s best athletes, training alongside Judy Pollock and coached by Henri Schubert.

At the 1964 Tokyo Olympics, she won bronze in the 80m hurdles in a blanket finish in 10.5 seconds, however she set a new world record in the event just after the Games. World record times continued in the 80m hurdles and Ryan began to improve her performances in other events such as the sprints.

Ryan defended her Commonwealth hurdles title at the 1966 Kingston (Jamaica) British Commonwealth Games in a time of 10.9 seconds, and also won gold in the 4x110yds relay with Dianne Burge, Jennifer Lamy, and Joyce Bennett.

Ryan was considered the favourite for 80m hurdles at the 1968 Mexico City Olympic Games, even though her world record had been broken by a Russian athlete. However, she was troubled by injuries and was beaten into second by fellow Australian Maureen Caird in the final with a time of 10.4 seconds. Mexico was not a lucky games for Ryan. She had been training with the Australian 4x100m relay squad and the team was considered a strong medal favourite. Just prior to the start of the Games, it was discovered that officials had neglected to include her name on the entry form and another athlete had to replace her in the second leg. As such, the relay practice was all in vain and the team, without Ryan, eventually finished fifth in the final.

After her disappointments in Mexico, Ryan competed at the Pacific Conference Games and won the 100m hurdles in 13.1 seconds. The hurdles were now run over the new 100m distance, although Ryan had been experimenting with the distance since as early as 1962. The Pacific Conference Games were a quadrennial athletics competition, held between 1969 and 1985 and contested by Australia, Canada, Japan, New Zealand and the United States. The 1981 event was open to athletes from all nations.

At the 1970 Edinburgh British Commonwealth Games, she defended her hurdles titles (now the 100m), achieving a record third consecutive gold medal with a time of 13.27 seconds, comfortably beating her Olympic nemesis, Maureen Caird. She was selected to carry the Australian flag in recognition of her achievements at the Commonwealth Games, becoming the first woman ever to be awarded this honour.

Temporarily retiring after the 1970 Games, the lure of Olympic gold brought her back to the track in 1971. She seemed as fast as ever over the sprint hurdles and also set five world records (though one was not ratified) for the new event, the 200m hurdles. Just before the 1972 Munich Olympic Games, she appeared to be in top form, smashing the world record for the 100m hurdles with a time of 12.5 seconds in Poland. However, injury and a long season seemed to take their toll. Despite equalling her national record of 12.93 (which still stood in 2003) in the final of the 100m hurdles, she managed to finish fourth. After these Games, Ryan retired from international athletics.