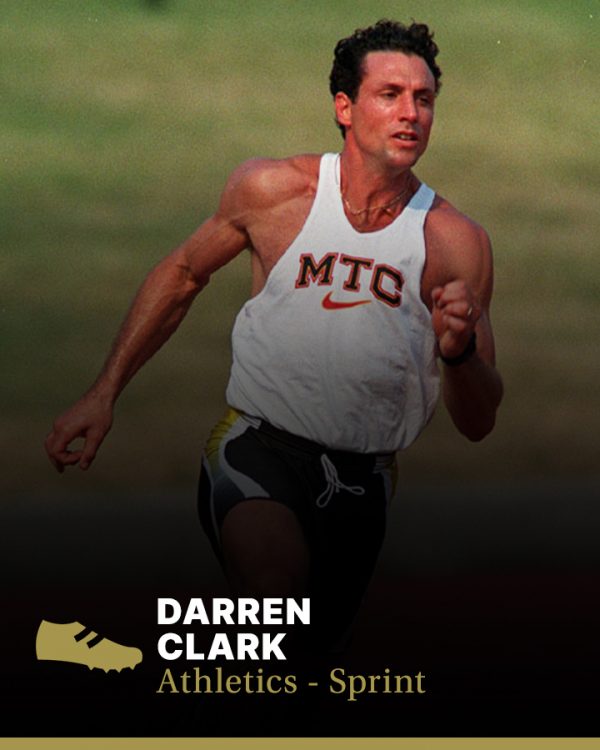 Darren Clark was inducted into the Sport Australia Hall of Fame in 2000 for his contribution to the sport of athletics.

Darren Clark burst onto the Australian athletics scene as a teenager with boyish good looks and a natural ability that saw him become the pin-up boy of Australian sport throughout a decade-long career between 1983 – 1994. Clark remains regarded as of the country’s greatest ever 400m runners and still holds the Men’s National Record across the distance.

He began his international career as a 17-year-old at the World Athletics Championships in Helsinki, Finland, where made the 400m semi-final. In the same year he won his first British AAA 400m title and held the 400m World Record (for his age). He was also crowned Australian 100m, 200m and 400m junior champion. The following year, he defended his British AAA title and won the 400m final at the London Grand Prix, the Bissellett Games in Oslo, Norway and the 300m at Gateshead, England – a win that came in Commonwealth Record time.

Clark qualified for the 1984 Los Angles Olympic Games where he ran an Australian Record time to in both the Men’s 400m Semi Final and Final. He led the field with 80m to go in the Final before fading to finish fourth. Clark maintained that he was beaten to the bronze medal by at least one opponent that may not have been playing by the rules. By the end of the 1984 season, he was ranked number four in the world across 400m.

Clark again won the British AAA 400m title in 1985 and finished third in the Men’s 200m at the IAAF World Cup held in Canberra, Australia. He maintained his world ranking of fourth in the 400m and headed into 1986 with great confidence. At the 1986  Edinburgh Commonwealth Games, Clark won silver in the 400m and the 4x400m relay, and again won British AAA 400m title for a record fourth consecutive time – the most ever achieved by any athlete to that time. Later that year he won bronze in the 400m at the Zurich Grand Prix, then gold in the 300m in Belfast, Ireland in another Commonwealth Record, and won the Australian open 400m title, while keeping a tight hold on his number four world ranking over 400m.

1987 was a less successful year for Clark on the international circuit – he finished 16th in the 400m and 13th in the 4x400m relay at the World Championships in Rome – however, he was crowned New South Wales State Champion across 100m, 200m, and 400m which was the first time this had happened in 70 years. The following year he competed at the Seoul Olympic Games and broke another Australian record in the 400m semi-final before finishing 4th in the final and 6th in the 4x400m relay.

Clark was the Australian 200m and 400m champion again in 1989, which helped him prepare for the 1990 Auckland Commonwealth Games where he won gold in the 400m and finished fourth in the 200m. He was unable to keep his winning streak at the British AAA Championships alive and finished third in the 400m.

Clark was also a gifted Rugby League player and took time away from the track in 1991 to play a season the Balmain Tigers. He scored scoring 11 tries and competed in the World Sevens Tournament before feeling rejuvenated enough to return to the track in time for the 1992 Barcelona Olympic Games. Unfortunately, after qualifying, Clark was forced to withdraw from the Games due to an Achilles tendon injury, however, with training and persistence, he returned to the track in 1993 and won bronze in the 400m at the World Indoor Championships in Toronto, Canada, and his fifth national 400m title. In 1994 he was defeated for the first and only time over 400m in Australia with a narrow loss at the Grand Prix meeting in Sydney.

After spending time coaching, Clark was unfortunately involved in a car accident in 2000 as he was training for a comeback which meant that his sole focus was now coaching and, in 2001, he was appointed as the Scholarship Coach at the Australian Institute of Sport.