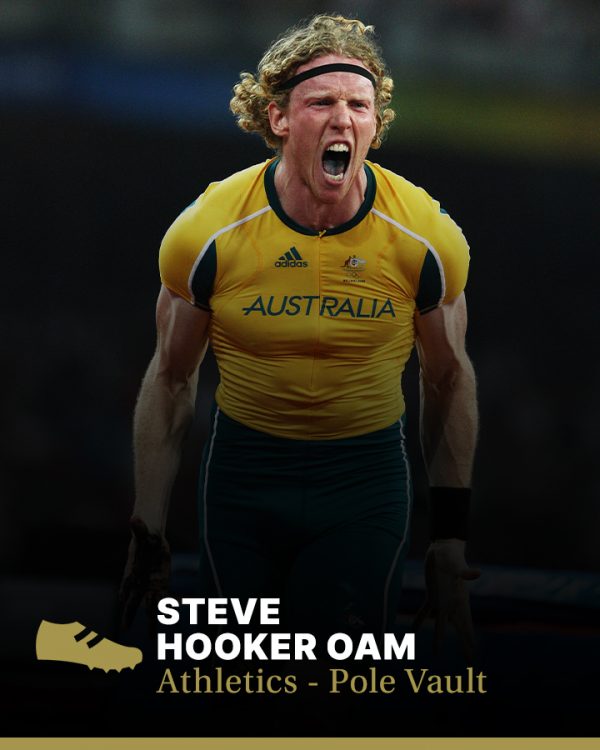 Steve Hooker OAM was inducted into the Sport Australia Hall of Fame in 2017 as an Athlete Member for his contribution to the sport of Athletics.

The first pole vaulter to be inducted into the Hall of Fame, Hooker remains one of only a handful of athletes to hold Olympic, World Championship, IAAF World Indoor Championship and IAAF Continental Cup titles simultaneously, after completing the winning set in 2010, and was the first Australian man to hold both the Olympic and World titles concurrently. Hooker was born into a family of athletic champions – his mother Erica was an Olympian (1972) and Commonwealth Games long jump silver medalist (1978), and his father Bill represented Australia at the at the 1974 Commonwealth Games and won four national athletic titles – so it was no surprise when his career followed the same path.

Hooker’s athletic career started out at the Box Hill Athletic club, in suburban Melbourne, where he competed modestly in several events before a breakthrough fourth-place finish at the World Junior Championships in 2000. He performed well enough to earn selection on the Australian team at the Athens Olympic Games in 2004, however, he failed to make the final there and it wasn’t until the 2006 Commonwealth Games in Melbourne that he tasted international success. Later that year he turned professional and returned to Greece for the IAAF World Cup where he beat Daichi Sawano (Japan) and German Chiaraviglio (Argentina) to the gold medal.

After the 2006 Games, Hooker moved from Melbourne to Perth to train with the Russian coach Alex Parnov, whom he describes as “the best pole vault coach in the world” who overhauled Hooker’s technique, changing both his run-up and his grip. The first international trial of this new technique came in 2007 when Hooker placed third at the World Athletics Final. Hooker followed this up with another bronze at the IAAF Indoor Championships at the beginning of 2008 and soon became the thirteenth person in history to clear the magical 6m mark. He was headed for the Beijing Olympics full of confidence, but little did he know exactly where that confidence would take him.

As he progressed through the Heats and into the Men’s Pole Vault Final, Hooker sensed he was a better-than-good chance at Australia’s first track and field gold medal since Cathy Freeman’s 400m victory at the Sydney Games in 2000 when his biggest threat, Russia’s Evgeny Lukyanenko, failed to clear the bar at 5.90m. Hooker had clipped the bar in two previous attempts, however, steeled himself and cleared his head: “Evgeny’s out of it. It’s in my own hands. If I clear that bar, I’m the Olympic champion.” At his third attempt, and with the knowledge of an improved technique giving him added confidence, Hooker cleared the bar and became the first Australian male since Ralph Doubell, in Mexico City 40 years prior, to win track and field gold for Australia; and in doing so, he set a new Olympic Record of 5.06m. The move across the country in 2006 had paid off and was the catalyst for his success on the other side of the world in 2008 and, due to the significance to Australian sport, Hooker was awarded the Don Award in 2008 for his achievements in Beijing. On a personal note, his life changed in more ways than one in 2008 as, along with a gold medal, an Olympic Record, and winning the Don Award, and he met his future wife, Russian middle-distance runner Yekaterina Kostetskaya.

Hooker wasn’t content with just Olympic success and set his sights on the Boston Indoor Games where he continued to break records – in Boston he cleared a PB 6.06m to set a new Oceania Record and secured his spot as the third best pole-vaulter of all time, across all conditions. He entered the 2009 Athletic World Championship in Germany with a torn adductor and looked to secure another gold medal in as few vaults as possible – it took him only two, and only one in the final. He became the first person to win two The Don Awards in 2009 – only Sally Pearson in 2012 and 2014 has also done so.

In 2010 Hooker became the only international athlete to hold all five major titles; Olympic Games, World Championships, Commonwealth Games, World Indoor Championships, and IAAF Continental Cup simultaneously after he won gold at the World Indoor Championships with a Championship Record vault of 6.01m, however, midway through the year he suffered a bad fall at the Great North City Street Games that threatened to derail his career. Any fear or concern was laid to rest, though, when he won gold at the Continental Cup in Croatia – again setting Championship Record – before he went on to defend his Commonwealth title at the 2010 Commonwealth Games in Delhi.

Mounting injuries and the mental toll of competing at the highest level meant Hooker struggled to find his best form after the 2010 Games and he finished outside the medals at the World Championships in South Korea, before managing a comeback of sorts at the 2012 London Olympic Games. Hooker vaulted well enough to make another Olympic final, however, failed to record a jump and finished thirteenth overall.

Hooker married Kostetskaya in 2012 and the pair welcomed son, Maxim into the world in 2013, then in 2014, Hooker announced his retirement from international athletics. He did make one last return to the track in a Box Hill singlet at the 2014 Domestic Athletics Finals where he ran in the 4x400m relay at Albert Park.