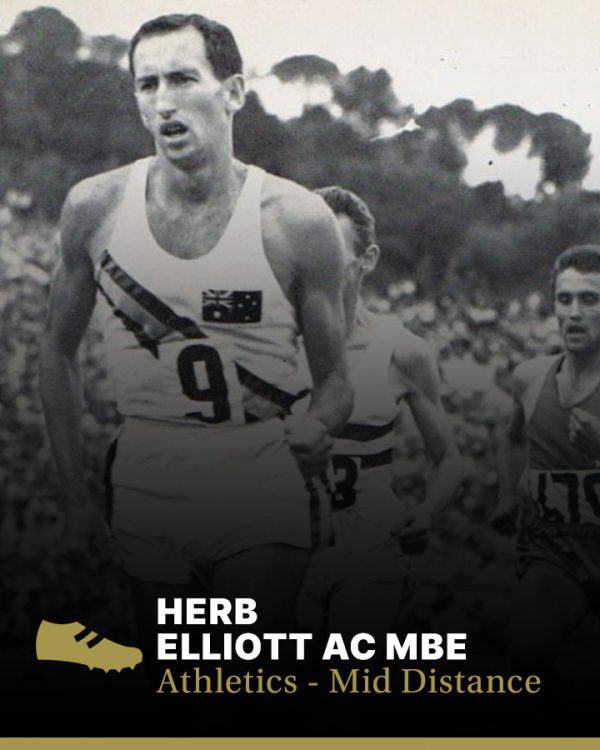 Herbert ‘Herb’ Elliott was inducted into the Sport Australia Hall of Fame in 1985 as an Athlete Member for his contribution to the sport of athletics and was elevated as a  Legend of Australian Sport in 1997.

He made just one Olympic appearance – an unforgettable run in the 1500m at the 1960 Rome Olympic Games. Elliott was the only Australian to win gold in the stadium when he streaked away to win by an amazing 20m. He also became the first Australian male runner to win on the track since Edwin Flack in 1896. In his short but magnificent career, Elliott broke the four minute barrier for the mile 17 times.

Elliott grew up among the sand hills of Scarborough, Perth, and established himself as a talented sportsman during his school years. During 1955, a year in which he won the Australian junior 880yds and mile championships (beating Ron Clarke in the latter), the colourful coach Percy Cerutty visited Elliott’s school, watched him run, and pronounced that within two years he would cover a mile in four minutes.

Elliott made the trip across to Melbourne with his family for the 1956 Melbourne Olympics. During that visit, he also travelled down to Portsea to Cerutty’s training camp. When Cerutty suggested that he stay at Portsea while the rest of his family go back to Perth, he jumped at the chance.

Elliott was in peak form in 1958 with numerous world records and broke the four minute barrier for the mile ten times. He broke the mile and 1500m world records with times of 3 min 54.5 sec and 3:36.0 sec in Dublin and Gothenberg respectively, and won gold medals over the mile and 880yds at the 1958 Cardiff British Empire and Commonwealth Games.

At the 1960 Rome Olympics, he went into the 1500m as strong favourite, holding a new world record of 3:36.0. All nine runners in the final that day had previously broken four minutes for the mile.

Elliott ran his normal race for the first two laps, settling into fourth or fifth place, careful to take no risks about letting himself be boxed in. Then he moved up a gear, and hit the front with a lap and a half to go. Elliott was striding out in front as the bell sounded, running so hard he broke his own world record by nearly half a second with a time of 3:35.6. His winning margin was the biggest in Olympic history and it took the world seven years to catch up to his record.

Elliott retired from athletics in May 1961 having accrued an amazing 44 consecutive victories in world class competition for distances up to a mile. Many believe Elliott retired too early but at the age of 22, he decided to quit running and pursue a career in business.

Elliott was one of the bearers of the Olympic torch at the Opening Ceremony of the 2000 Sydney Olympics, and entered the stadium for the final segment before the lighting of the Olympic flame by Catherine Freeman.