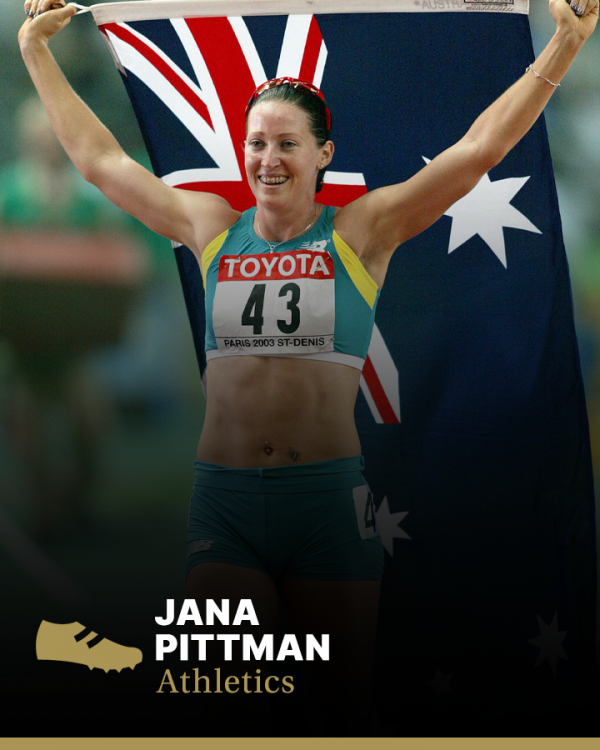 Jana Pittman was inducted into the Sport Australia Hall of Fame in 2021 as an Athlete Member for her contribution to the sport of athletics.

Jana Pittman created Australian Olympic history by becoming the first female – and second athlete overall – to compete at both the Summer and Winter Olympic Games. She represented Australia in athletics at the Sydney 2000 Olympics and the Athens 2004 Olympics before switching to bobsleigh at the Sochi 2014 Winter Olympics.
Pittman’s athletics career saw her win two 400m hurdles World Championships, her first in 2003 making her the youngest World Champion in history and four years later regaining that same title.

Having previously made her Olympic debut in Sydney, injury derailed her preparations for Athens. Pittman underwent surgery a week prior to the 2004 Olympics, yet still came away finishing fifth in the 400m hurdles – one of her most courageous performances. Persistent injuries saw her miss the Beijing 2008 Olympic Games and London 2012 Olympic Games before she made the switch to the two-woman bobsleigh team.

At her first Olympics in Sydney, 17-year-old Pittman finished third in her heat, missing the semifinal by one spot but showed a glimpse of her potential. She also played her part in the 4x400m relay heat alongside Cathy Freeman, Melinda Gainsford-Taylor, Tamsyn Lewis and Nova Peris finishing fifth in the final. Later that year, Pittman competed at the Chile World Junior Championships where she won gold in the 400 metre hurdles and 400 metres.

After two years of commitment and intense training, Pittman won gold in the 400m hurdles and 4x400m relay at the Manchester 2002 Commonwealth Games. At 20, she became the youngest 400m hurdles World Champion (male or female), winning gold at the Paris 2003 World Championship in a personal best time of 53.22.

But Pittman’s hopes of a successful 2004 Athens Olympic Games were dashed when she suffered a tear in her right knee during a warm-up meet. An initial MRI indicated her campaign could be over, but a second opinion and an operation in London put her back on track just 15 days later. At the Games, she produced an admirable performance in the 400m hurdles to finish fifth.

Pittman went into the Melbourne 2006 Commonwealth Games as the reigning champion and favourite. She successfully defended both titles from 2002, securing gold in the 400m hurdles in a time of 53.82 as well as gold in the 4x400m relay.

In 2007, eight months after giving birth to her son, Pittman won her second World Champion crown when she won gold at the Osaka Japan World Championships in a time of 53.31.
Her hopes of an Olympic medal were dashed in successive Olympics when ongoing injury issues cost her the chance to compete in Beijing in 2008 and London in 2012.

But Pittman wasn’t content to let her Olympic dream die. Instead, she teamed up with her former hurdles training partner, Astrid Radjenovic (Loch-Wilkinson), to train for the women’s bobsleigh for the Sochi 2014 Winter Olympics.

Pittman, as brakeman, and Astrid Radjenovic, as pilot, qualified for Sochi, finished 14th at her third Olympics. That performance etched her name into the history books as the first Australian woman to compete in both Summer and Winter Olympic Games. Only one other Australian athlete, Paul Narracott, had previously achieved the feat.

Pittman also had the distinction of being one of only nine athletes to have won a World Championship at youth junior and senior athletic events. That feat puts her in rarefied company, alongside the likes of Usain Bolt, Valerie Adams, Dani Samuels and Veronica Campbell Brown.