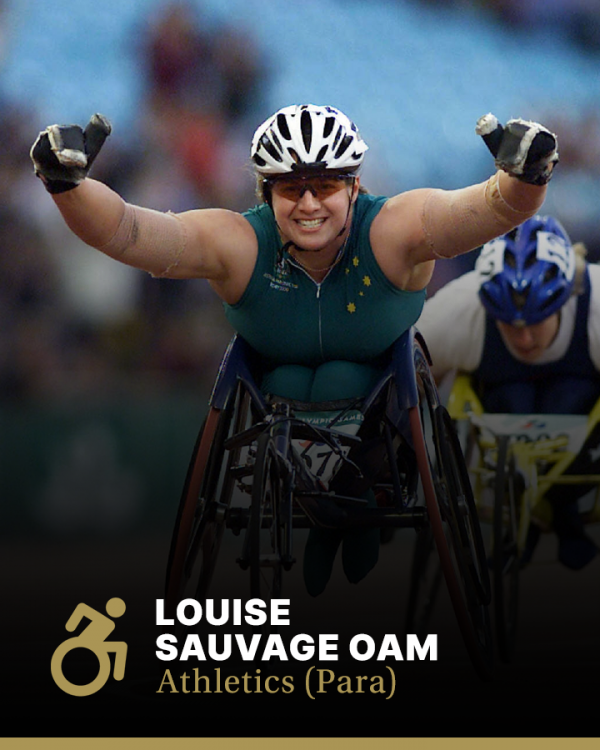 Alix ‘Louise’ Sauvage OAM was inducted into the Sport Australia Hall of Fame in 2007 as an Athlete Member for the sport of athletics. In 2019 she was elevated as the 41st Legend of Australian Sport.

Legend status is the highest honour that can be bestowed in Australian sport and in Sauvage’s case it has extra historical significance because she is the first Para-athlete to achieve it.

Sauvage has been recognised not just for an extraordinarily successful career as a wheelchair racer but for her pioneering efforts in raising the profile and perception of Paralympic sport and athletes in Australia and around the world.

In keeping with the SAHOF criteria for Legend status, her performances are considered part of Australian folklore and hers is the first name that springs to mind when people think about Para-sport.

Professionalism, dedication and a steely determination have driven a career where Sauvage has received universal acclaim. This was formalised in 2000 when the inaugural Laureus World Sports Awards – known as the Oscars of sport – named her World Sports Person of the Year with a Disability.

That same year, she was given the honour of lighting the cauldron at her home Paralympics in Sydney, where she won two gold medals and a silver and was largely responsible for elite Paralympic athletes earning the public respect and admiration that their able-bodied counterparts enjoy. She carried the flag leading out the Australian team at the Athens 2004 Paralympic Games Opening Ceremony four years later.

In a career that began at age 16 at the International Paralympic Committee World Athletics Championships in 1990 until she retired after the Athens Paralympics in 2004, she was a dominant force.

The many highlights include:

Sauvage was born with a severe congenital spinal condition which inhibits the function of the lower half of the body, giving limited control over the legs. She endured 21 operations before the age of 10.

She took up swimming at age three and wheelchair sport at eight. Swimming became unfeasible after her spinal curvature worsened in 1987. When she was 14 she had steel rods inserted into her back spending months in hospital, which she later described as “the worst years of my life.” Her determination to be an athlete allowed her to make an incredible recovery and her focus turned to wheelchair racing.

In 1990 she competed in her first IPC World Athletics Championships in Assen, Netherlands and won gold in the 100 metres in a new world record. Unfortunately, after crossing the finish line first, she was disqualified for a lane violation in the 200 metres. In the same year she won five gold medals at the Stoke Mandeville Games in England. Following this success, she was awarded a scholarship to the Australian Institute of Sport.

She was selected for her first Paralympic Games in 1992 where she won gold in the 100, 200, and 400 metres and silver in the 800 metres as well as placing sixth in the marathon.

In 1993 she won the 800 metres wheelchair race at the IAAF World Championships in Stuttgart, Germany, beating former world number one Connie Hansen from Denmark.

That same year she competed in three marathons finishing fourth in Los Angeles and third in Boston before winning the Melbourne marathon. And in the same year, she was awarded the ABC’s Junior Female Athlete of the Year.

In 1995 at the IAAF World Championships, in Göteborg, Sweden she defended her 800 metre title from 1993, this time defeating Canada’s Chantal Petitclerc with whom she would have one of the greatest sporting rivalries for the rest of her career. The same year she competed in five marathons finishing first in the Gold Coast and Sydney marathons, second in Los Angeles and Oita, and fourth in Boston.

Sauvage competed at her second Paralympic Games in Atlanta in 1996. She won four gold – 400, 800, 1500 and 5000 metres and finished fourth in the marathon. She continued her major international road racing  career placing first in the Oita marathon in Japan and second in Boston.

In 1997 she won her third consecutive 800 metres at the IAAF World Championships this time in Athens, ahead of Petitclerc and Britain’s Tanni Grey. This year she recorded her first victory at the famous Boston marathon and added Los Angeles and Berlin to her victories.

The 1998 IPC World Athletics Championships in Birmingham proved to be the most successful of her career. She won six gold medals, including two relays. She won the 800, 1500, and 5000 metres and the marathon and was part of the victorious 4×100 and 4×400 metre relay teams. She successfully defended her Boston marathon title, something she was able to repeat a year later.

The Sydney 2000 Olympic Games provide fond memories as she was part of the Olympic Torch Relay, her leg crossing the Sydney Harbour Bridge. She won gold in the 800 metres demonstration event as she had in Atlanta four years earlier.

The focus was now on her hometown Paralympic Games.  After being given the honour of lighting the cauldron at the Opening Ceremony, she went on to win gold in the 1500 and 5000 metres and silver in the 800 metres.

In 2001, at the IAAF World Championships in Edmonton, Canada she again won the 800 metre event. She also won the Boston marathon for the fourth time in what was to be her final appearance at the great race and competitive marathon.

At the 2002 Commonwealth Games in Manchester she won silver in the 800 metres while at the IPC World Athletics Championships in Lille, France, Louise won gold in the same distance for the third time and silver in the 1500 and 5000 metres.

She competed for the last time at an IAAF World Championships in Paris in 2003 winning the 800 metres for the fifth time.

The 2004 Paralympics would be her last Games and her extraordinary career was acknowledged when she was chosen to carry the Australian flag at the Opening Ceremony. She finished her Paralympic career with silver medals in the 400 and 800 metres.

After retiring from competition Sauvage became involved in coaching wheelchair athletes. She established a Foundation to support athletes with disabilities in 2001. She is now a well-respected coach with the NSW Institute of Sport, her athletes having achieved Commonwealth Games gold, Paralympic medals, world records and World Championship gold.

In retirement Sauvage turned her hand to mentoring and coaching the next generation of wheelchair athletes and has worked with the New South Wales Institute of Sport in guiding Australia’s para-athletes and preparing them for Paralympic competition. Her athletes have achieved Commonwealth, Paralympic and World Championship success, among them is Tokyo 2020 Paralympic gold medalist Madison de Rozario.

In her biography, Louise Sauvage: My Story, Sauvage summed up her attitude to life succinctly: “I never thought of myself as being different or disadvantaged. I’m just me – the way I am. The circumstances of my life put me in a wheelchair – but it has been my own efforts that have taken me around the world, and to the successes I have had. You’ll never know what you can do or achieve until you try.”