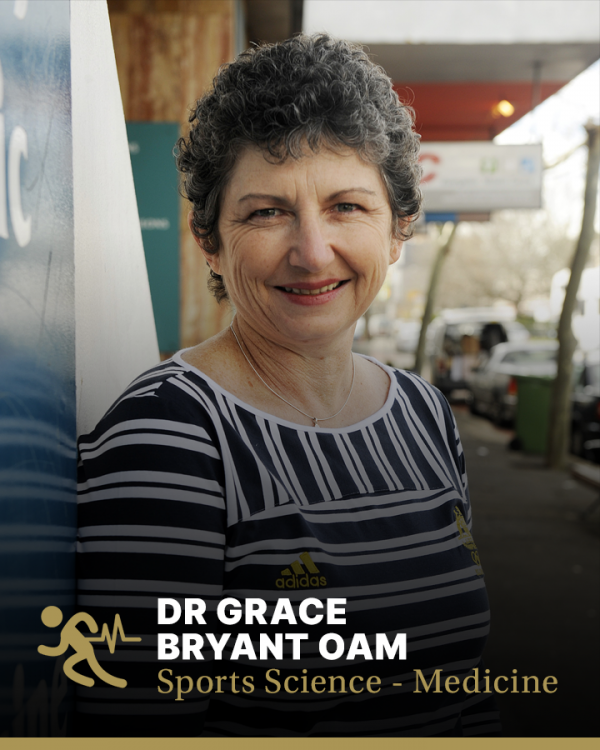 Dr Grace Bryant OAM was inducted into the Sport Australia Hall of Fame in 2017 as a General Member for her contribution to Sports Medicine.

Grace Bryant has been a medical professional of significance within the Australian sporting landscape for nearly three decades, working with world-class athletes from national leagues to the Olympics. She has been a medical officer at five Olympic Games and five Commonwealth Games while receiving awards such as the Medal of the Order of Australia in 2008 for services to sports medicine. Bryant is a member of the Netball Australia Hall of Fame, life service member of Netball Australia and life member of Netball NSW who has had significant roles within the national water polo and hockey teams. Bryant has been a long-time director of South Sydney Sports and Orthopaedic Medicine (1985-2014) and is a director of a practice operating at Sydney University called Sports Medicine at Sydney University.

Grace Bryant completed her medical training at the University of Sydney in 1978 and was awarded University Blues for outstanding sporting achievement as an athlete in netball and water polo.

Initially, her start within the sports medicine field was very much at a grassroots level volunteering with local sports clubs and events while completing her hospital work as a junior doctor.

Bryant started working at the first private sports medicine practice in Australia, which was started by Jeni Saunders, who was a significant colleague and mentor as she started building her knowledge and experience. She was soon a director at South Sydney Sports and Orthopaedic Medicine in 1985. The pair were among the founding members of the Australasian College of Sport and Exercise Physicians.

Her long-running partnership within Netball Australia began in 1991 with roles including Chief Medical Officer for Netball Australia and Team Doctor for the Diamonds from 1991 to 1999, team doctor of NSW Swifts and a member of the International Netball Advisory Panel. In 2012, she was inducted into the Netball Australia Hall of Fame for her services to the game during a successful period for the national team.

It was only five years later that Bryant got the call up for her first Olympic Games as a medical officer for the Australian team at the 1996 Atlanta Olympic Games.

Over the next four years Bryant started working with the national women’s water polo team, with whom she would be medical director for over 17 years, after being appointed as the tour doctor for the Australian women’s hockey team in 1997 – a position she held for seven years.

The Olympic cycle following the Athens Games was a notable period in her career, being appointed as the deputy chief medical officer for the Australian team at the 2006 Commonwealth Games in Melbourne and then awarded the Medal of the Order of Australia for services to sports medicine in 2008 before attending her fourth Olympics in Beijing.

Two years later, Bryant was appointed deputy chief medical officer for the Australian team at the Commonwealth Games in Delhi before venturing to London for her fifth consecutive Olympic Games as a team medical officer in 2012. That year she was also given the chief medical officer position for the Australian Commonwealth Games team in Glasgow in 2014.
Other highlights throughout her medical career include serving as a team physician for Newtown Rugby League Club, Sydney Swans and Canterbury Bulldogs. She has been president of the NSW Branch of Sports Medicine Australia, secretary of the Australasian College of Sport and Exercise Physicians and a senior lecturer at the University of Sydney.

Bryant has particular clinical interests around women in sport, which led to an Australian Sports Commission Sports Award for services to Women’s sport in 2004, and education on drugs in sport issues. She is a Fellow of Sports Medicine Australia, a member of the American College of Sports Medicine and Women’s Sport New South Wales.

Since 2007 she has also played a significant role as a member of the Australian Sports Drug Medical Advisory Committee, which was a ministerial appointment.