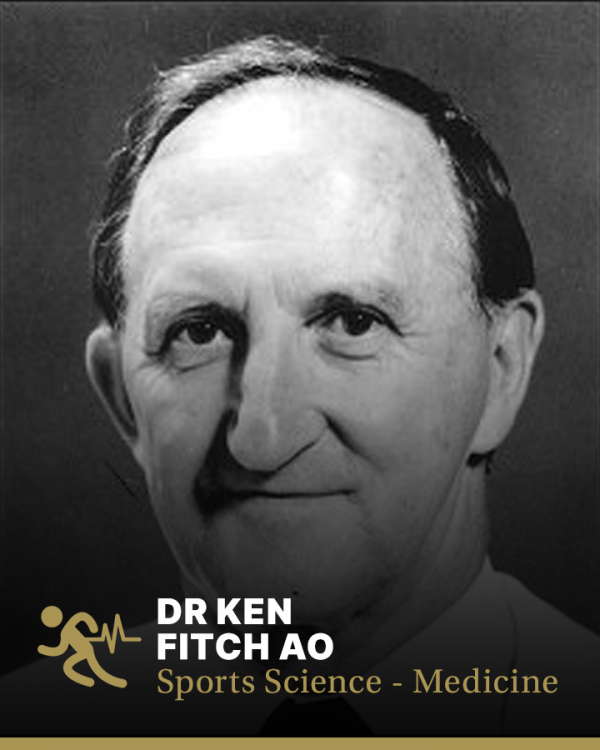 Dr Ken Fitch AO was inducted into the Sport Australia Hall of Fame as a General Member in 1997 for his contribution to sports science – medicine.

Dr Fitch has dedicated his working life to the field of sports medicine and in particular to the management and operation of Australian Olympic teams.

Fitch received his early medical education in Adelaide as there was no medical faculty in Perth at the time. During vacations in his medical course he was employed by the Royal Perth Hospital as a pharmacy assistant.

As a Subiaco General Practitioner he became interested in health programmes particularly those related to sports. In 1969 he established a sports and soft tissue injury clinic which he headed until July 2001. He commenced swimming classes for asthma sufferers in 1971 and established national sports medicine courses for doctors in 1981.

For 40 years Fitch has played a leading role in sports medicine. From the Olympic games of 1972 onwards he has served as a physician and from 1975 to 1984 he was the chief physician at each Olympics.

In 1985 he became a Member of the Australian Sports Commission’s National Program on Drugs in Sport, later renamed the Australian Sports Drug Agency, and was Deputy Chairman from 1987 to 1992. Fitch played an instrumental role with the recognition of the AGAL in Pymble NSW as an IOC accredited laboratory leading in the fight against drug abuse in sport.

His interest in sport seems unending, he is currently the team doctor for the West Coast Eagles Football Club. Fitch has also being involved with the Australian Institute of Sport since 1974 in various roles and committees and is currently the Medical Consultant at the University of Western Australia Department of Human Movement and Exercise Science.

Fitch has written extensively on sports medicine, illustrated by more than 58 articles in preferred journals, 28 book chapters and has been editor of seven books.