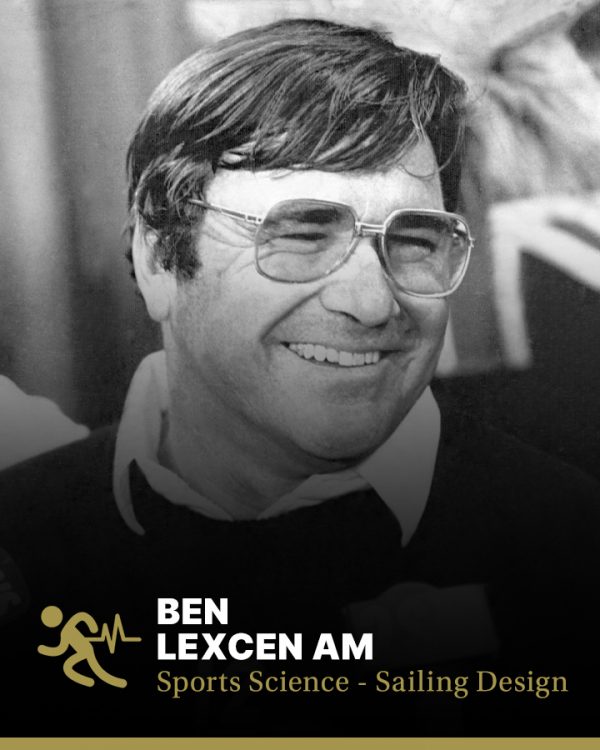 Ben Lexcen AM was inducted into the Sport Australia Hall of Fame in 2005 as a General Member for his contribution to sports science and the sport fo sailing.

Originally Bob Miller, Ben was a sail maker who became an acclaimed designer of yachts and achieved international fame for his revolutionary winged keel which enabled Australia II to win the America’s Cup in 1983, breaking the longest running winning streak in sporting history (132 years). The wings were devised after years of study and four months of experiments in 1982 in the Dutch Wageningen tank. He won the 1983 Award for Design Excellence for Australia II and also won the Ted Kenyon Memorial Trophy as the person who did most for boating in 1983.

After a tough childhood, Lexcen virtually educated himself in highest mathematics and hydrodynamics to become a brilliant designer of all manner of craft including dinghies, 18-footers, and ocean racers.

Lexcen was also a fine sailor and was 18-foot world champion in 1961. He was many times Australian champion in the Soling Class (1971 and 1972), the Flying Dutchman class, and the 18-foot class. He was also successful in the VJ, 16-foot, VS, and Star classes.

He represented Australia in the 1968 and 1972 Olympics and was the designer and crew member in the 1973 Admirals Cup yachts Apollo II and Gingko. His yachts Ballyhoo and Apollo both won the Sydney to Hobart race, Ballyhoo in 1976 and Apollo in 1978.

Lexcen was also always willing to have a go at all sorts of projects. He designed a surfboard fin with Cheyne Horan in 1983, and the Swinger dinghy was for years a great sail trainer for young sailors.

In 1984 he was made a Member of the Order of Australia (AM) for his work on Australia II. His thinking was never conventional, but he always retained an ability to relate to people at all levels, and to influence them to think ‘outside the square’. In 1988, the University of New South Wales introduced the Ben Lexcen Sports Scholarship. It was the first Australian University sports scholarship scheme.