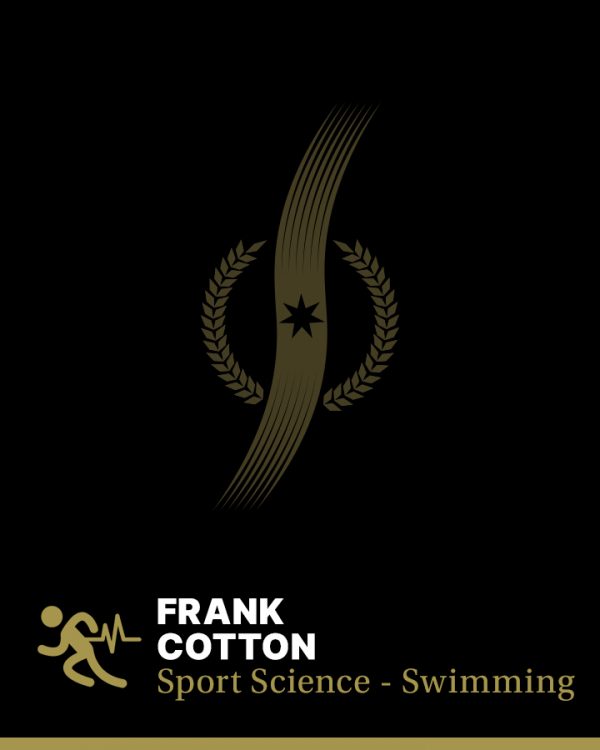 Dr Frank Cotton is widely considered to be the ‘Father of Sport Science’ in Australia.

Cotton was educated at Sydney High School and the University of Sydney. He excelled in sport and developed a lifelong interest in its effects on the body; he won a blue for swimming, and in 1921 he won the New South Wales 440yds (402m) and 880yds (805 m) championships; he held all university titles from 220yds (201m) to one mile (1.6km) for over 20 years. He became a lecturer and demonstrator in physiology in 1913 and was made chief lecturer in 1923.

Cotton’s doctoral thesis was on ‘Studies in centre of gravity changes’ and he published papers on the physiology of circulation and respiration. In 1932 he was awarded a Rockefeller travelling scholarship and spent 18 months in the United States of America. Appointed reader in 1938, he was senior research fellow of the National Health and Medical Research Council from 1939 to 1945. He became research professor in 1941 and was professor from 1946 until his retirement in 1955.

During World War II, with the Royal Australian Air Force, he was responsible for the invention of the ‘Cotton aerodynamic anti-G flying suit’ in 1940, which minimised the effects of high-speed flying on pilots protecting them against blackout when making high speed turns or pulling out of a dive. It came at a time of great significance and value during World War II and was used extensively by pilots in the Allied air forces.

In 1932, he proposed using the heart rates of swimmers to determine the energy cost of the training effort. His research into the techniques of various sports and their physiological effects won international renown after the war. By 1947, he had installed the first-ever timing clock at the North Sydney Pool for use by swimmers for interval training. They swam repeat ‘efforts’ at various intensities, monitored by taking heart rates. Swimmers were amused when Cotton threw them the end of a long-tubed stethoscope to count heart beats. From the 1940s, he insisted that swimmers keep log books to maintain their scientific approach to the sport.

Cotton experimented with training methods with scientific colleague and all-around athlete Forbes Carlile. He instituted ‘shaving down’ with Olympic champion Jon Henricks, at a time when it was unheard of to shave your body for faster times.

The Australian swimmers were at the forefront in those days in applying new methods of training. Cotton was one of the men responsible for their success and for the scientific growth of the sport throughout the world.

He devised machines and instruments to test the effects of strain on athletes, and his experiments made it possible to improve training methods and to predict the adaptability of competitors to certain sports. Friendly and congenial, he received co-operation from many men and women. Cotton was also repsonsible for the ergometer, a machine to test the atheletic potential of sportsmen and women. In 1949 he used the ergometer to help select the victorious university eight-oar crew, and in 1952 was scientific adviser to the Australian Olympic team at Helsinki.

To aid his knowledge of human physiology, Cotton used his sisters as guinea pigs Janet endured endless experiments climbing stairs with a peg on her nose. Ethel once swung in a hammock for hours with her arm tied to a brick. In testing endurance levels, he did not spare himself either and once broke his neck cycling.