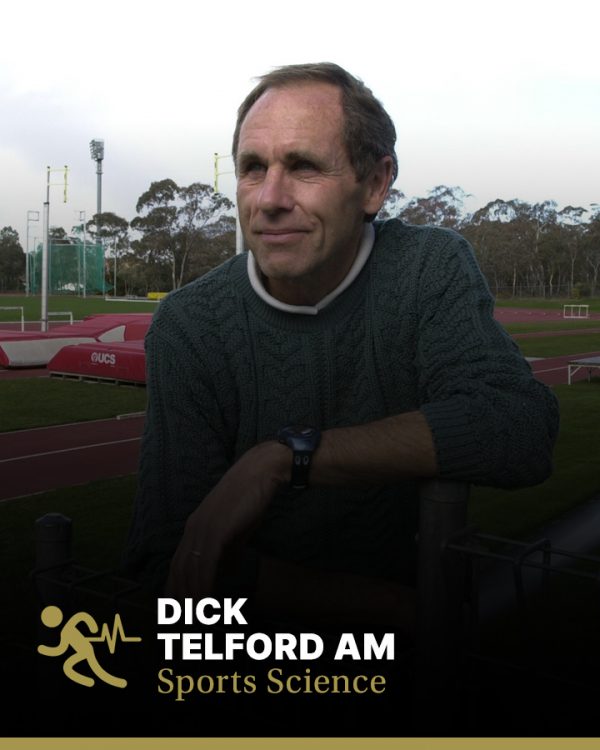 Dick Telford PHD AM was Inducted in The Sport Australia Hall of Fame on Thursday, 9th October 2014 as a General Member for his contribution to sports science.

A Liston-medal winning VFA footballer, Dick Telford went on to become a successful cricket and athletics coach (mentoring Olympic marathon silver medallist Lisa Martin-Ondecki and Commonwealth Games 5000 metre gold medallist Andrew Lloyd, among others) but he has made an even greater contribution to Australian sport as Head of Physiology and Applied Nutrition at the AIS and as Research Director of the Lifestyle of Our Kids Project. He has advanced our understanding of athlete health and performance through his books, his teaching and through approximately 100 articles in scientific journals.

Football career: Played one game of VFL with Collingwood in 1966 and two with Fitzroy (1967) before transferring to VFA Club Preston in 1968 where he was an immediate success, winning the J.J. Liston trophy for the Association’s outstanding player in his first season. He played 68 games with Preston (including with their premiership sides in 1968 and ‘69) and was twice the Club’s best and fairest. He also coached the club through the 1975 and 76 seasons.

Athletics: After football he turned to distance running, competing in six marathons with a best time of 2hr 27min. He then took to the track in the Masters competitilon and in 1984 won the M40 1500 metres in 1985 and at the World Veteran Games in Melbourne in 1987 tied for third in the 1500 metres.

Sports science: Dick Telford completed a Dip Ed in Physcial Education at Melbourne University which he progressively upgraded to BSc, then Master of Science and then a PhD with a doctoral thesis in Cardiorespiratory qualities of trained and untrained subjects and specificity of athlete performance.

He taught at Preston Institute of Technology until appointed to the newly formed Australian Institute of Sport in 1980 to become what is widely regarded as Australia’s first full time sports scientist. One of his first appointments was to offer Robert De Castella a role as a sports science technician. De Castella went on to become a world class marathon runner. Telford’s AIS role was later expanded to head of Applied Physiology and Nutrition. Later he became distance running coach at the AIS.

Coaching: Telford coached the Victorian state cricket team while studying at Melbourne University and while at the AIS was appointed team physiologist to the Australian swim squad at the 1984 Olympics. Having been a mentor of Robert De Castella, Telford then became coach of Lisa Martin Ondieki who took the silver medal in the marathon at the Seoul Olympics in 1988 (Australia’ first Olympic marathon medal).