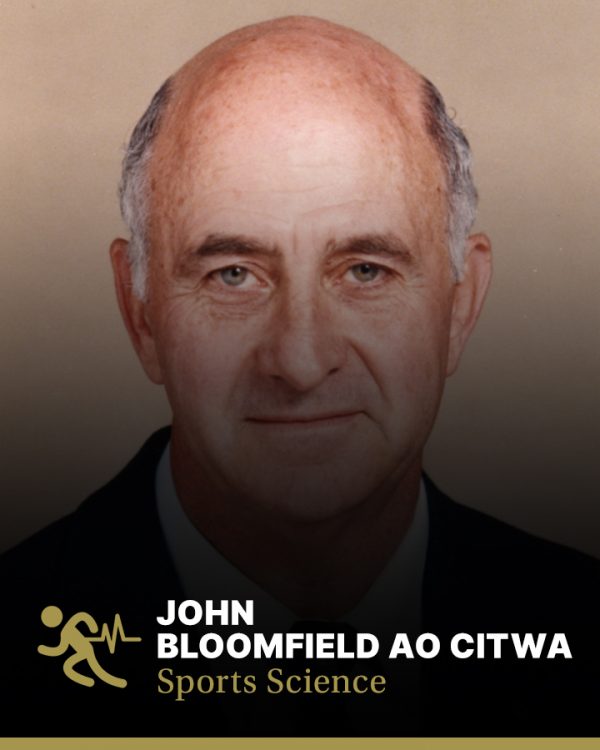 Prof. John Bloomfield AO was inducted into the Sport Australia Hall of Fame in 2007 for his contribution to sports science.

Hundreds of successful Australian sports men and women owe a debt to Prof. Bloomfield and his passion for a more scientific approach to training, technique and injury prevention in Australian Sport.

Prof. Bloomfield was an Emeritus Professor at UWA, but his influence continued through the many former students and proteges who held significant positions in sports medicine and coaching.

Bloomfield grew up in Kiama, New South Wales and became a successful surf life saver. In 1951/1952, he won the branch, state and Australian Junior Belt Championship and represented Australia several times in the 1950s. He won the Belt Race at The Royal International Carnival in 1954 at Bondi, New South Wales; and in 1956 he won a silver medal in the Surf Race at the International and Australian Surf Championship Carnival, Torquay, Victoria. The carnival was a display event held during the 1956 Melbourne Olympic Games. He wrote a book titled Know How to Surf.

In 1972 the Whitlam Government commissioned him to prepare a White Paper on the development of sport in Australia and this became extremely influential in the establishment of the Australian Institute of Sport (AIS) in Canberra in 1981. The white paper titled Role and scope and development of recreation in Australia. He prepared two reports that lead to the establishment of the Western Australian Department of Sport and Western Australian Institute of Sport.

In 1974, he became the Foundation Professor in the then Department of Human Movement, becoming Australia’s first professor to specialize in sport and exercise science. As a result of his experience, Bloomfield has advised ten Australian universities in regard to establishing similar degree courses.

In 1980, he was appointed deputy chairman of the newly established Australian Institute of Sport and in 1985 replaced Kevan Gosper as chairman, a position which he held until 1989. Whilst chairman, he was involved in managing the merger of the AIS with the Australian Sports Commission (ASC) and responding to the allegations of the Senate inquiry into drugs in sport. He was co-chairman of the ASC with Ted Harris during the merger period 1987 and 1989. In 2003, he authored the book Australia’s Sporting Success: The Inside Story, the first publication to document the development high performance sport in Australia.