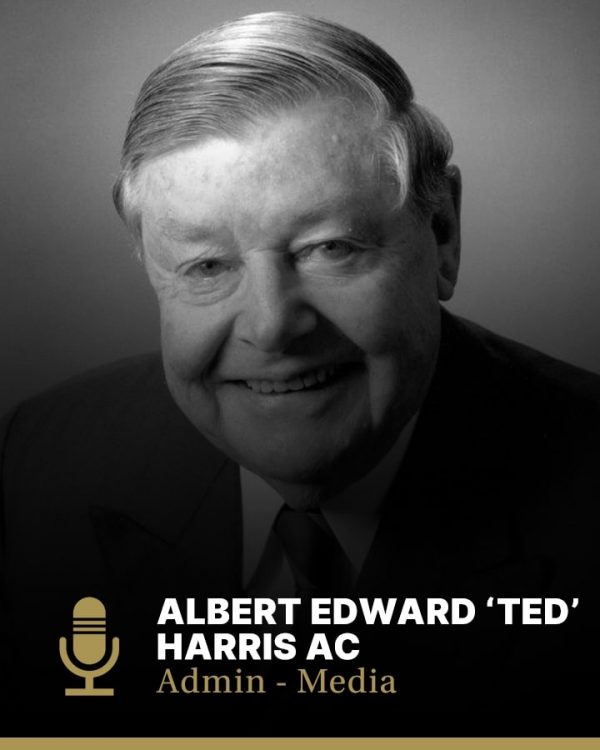 Ted Harris began his career on Radio 2GB describing sport, but ended shaping it for all Australians. Working with petroleum company Ampol he took sports and broadcast sponsorships to new levels and then, armed with these skills, became a formidable fundraiser for sport, particularly our Olympic teams.

Edward Albert Harris (born 4/05/1927) entered the emerging area of sports broadcasting with Sydney radio station 2GB and in 1946 called the first national broadcast of the Davis Cup for the Macquarie Network, providing dramatic ball-by-ball coverage to households across the nation.

Over the next 10 years he broadcast rugby league, rugby union, boxing, tennis and Test cricket, building a love for sport and an understanding of the role of broadcasting in promoting sport and, importantly, in giving it greater value to commercial sponsors.

He was to use this knowledge in subsequent years to unlock a treasure trove of sponsorship funds as his passion for all kinds of sports led him to a career in sports administration.

In 1947 he organised the Ampol golf tournament with a prize of one thousand pounds, then the highest prize ever offered golfers in Australia. In 1955 he was to provide the first direct international tennis coverage, calling the Davis Cup tie live from Forest Hills, New York.

In 1956 he won for Ampol and the Nine network TV rights to the Melbourne Olympics and –in a nation where many households did not yet have a TV set -installed sets in petrol stations across the nation so that people could watch.

Two year later he became a member of the Executive Council of the Canada Cup golf tournament.

In 1983 he was appointed chairman of the interim committee established by the Federal Government to recommend a formula and structure for an Australian Sports Commission and the following year, on the Commission’s establishment, he was appointed inaugural chairman and also chairman of the Australian Institute of Sport. He was to hold both positions for a decade and on retirement became the only person ever to have been awarded life membership of the ASC.

In the same year (1983) he chaired an inquiry into the incorporation of Rugby League.

As broadcaster, sponsorship pioneer and as administrator, Ted Harris served Australian sport for more than half a century. He fully deserves his place in the nation’s sporting pantheon.