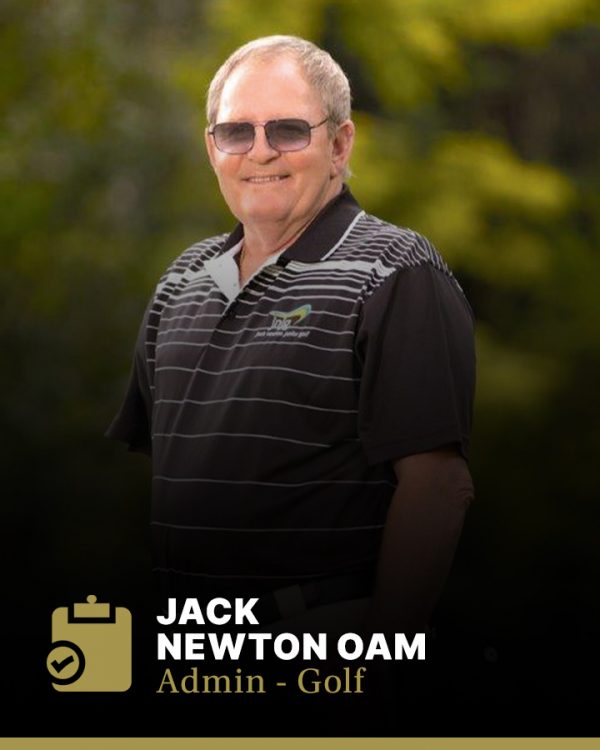 Jack Newton OAM was inducted into the Sport Australia Hall of Fame in 2016 as a General Member for his contribution to the sport of Golf.

Across a lifetime in golf, Jack Newton left an indelible mark. From his first professional win in 1972 to Australian Open and British match play titles, and runner up finishes at the British Open and US Masters. On course, he was one of the world’s best before a near fatal accident at Sydney Airport in 1983 in which he lost his right arm and eye meant his focus shifted to developing junior golfers, commentating, and designing golf courses. He also managed to assist young golfers and raise millions for both diabetes research and junior golf through his charitable work and the Jack Newton Golf Foundation and the annual Jack Newton Classic.

Newton turned professional in 1969 and became one of Australia’s most successful golfers for the next decade throughout the 1970’s and early 1980’s. He won his first title at the Dutch Open in 1972 and went back-to-back at the Benson & Hedges tournament the following week. He went on to record victories worldwide including wins on the USPGA Tour, the British Match Play and Australian Open crowns. He twice came agonisingly close to winning Major titles – he fell just one shot shy in an 18-hole playoff to Tom Watson at the 1975 British Open at Carnoustie then, at the US Masters in 1980, he finished tied for second behind winner, Seve Ballesteros.

At 33 and at the peak of his career, Newton’s on course ambitions changed forever when he collided with the propeller of an aeroplane he was boarding at Sydney Airport. Immediately after the accident, doctors gave Newton a 50-50 chance of surviving and he spent several days in a coma and eight weeks in intensive care. He lost his right arm and eye and suffered severe abdominal injuries as a result of the accident.

After a long rehabilitation, Newton returned to public life, determined to stay involved in the sport he loved. He embarked on a media career that included reporting for Australian newspapers and commentating on all major networks, including an exclusive 23-year run with Channel 7. Outside of his media commitments, Newton designed many golf courses and, perhaps most importantly, founded the Jack Newton Junior Golf Foundation in 1986, of which he was a long-serving Chairman. He also taught himself to play golf one-handed, swinging the club with his left hand in a right-handed stance and would typically score in the mid-80’s.

His Foundation was established to introduce young boys and girls to the game of golf and catered for all skill levels with programs from introductory golf in schools to elite level tournaments, along with programs for indigenous and disabled young people. The Foundation continues to provide junior golfers of all abilities to opportunity to enjoy the game.

2007: Awarded the Medal of the Order of Australia (OAM) for services to golf