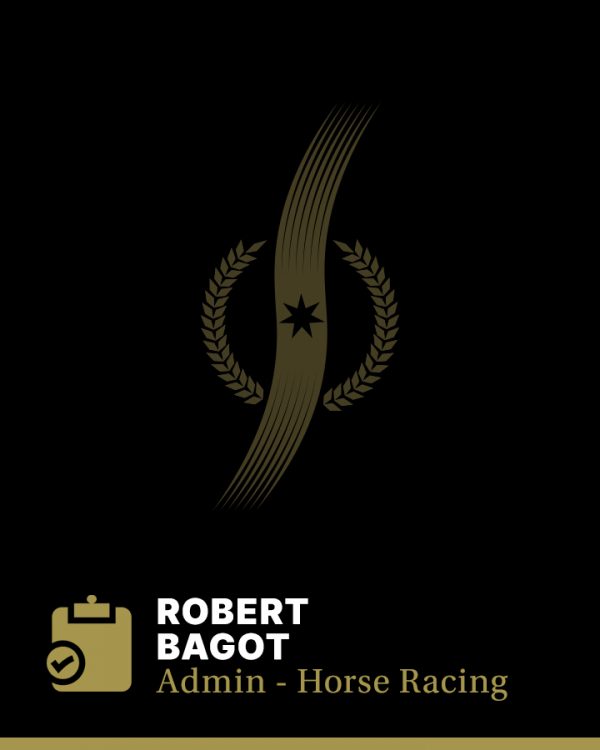 When the Victoria Racing Club was formed in 1864, it made the inspired choice of Robert Cooper Bagot as its first Secretary. Bagot was to transform the fortunes of the Club, and to establish the Melbourne Cup as Australia’s premier horserace. He proved himself to be one of Australia’s most able sporting administrators and had few peers within racing circles. His extraordinary drive, his business acumen, and numerous other talents contributed greatly to the early success of what is now the premier racing club in Victoria and gained for him a prominent place in Australian racing history.

Bagot was born in Ireland in 1828, immigrated to Australia in the 1840s, and established himself as a surveyor and civil engineer in Melbourne. As a result of his reputation the committee of the Melbourne Cricket Club invited him in 1861 to redesign their ground. He altered the playing area, which had previously been little more than a rough paddock, to make it a perfect oval and returfed the whole surface. The MCC so much appreciated Bagot’s work that he was made a life member.

Bagot is best remembered for his contribution to horse-racing in Australia. Before the 1860s, racing in Australia was a faithful copy of the English model and a pursuit of the privileged classes. Bagot played the leading part in the development that gave colonial racing its present egalitarian character and made it the recreation of the masses.

When appointed to his VRC post, Bagot set about rejuvenating Flemington. He realised that if the club was to prosper, the racecourse must provide amenities and facilities that would attract the racing public. The lawn area was renovated and beautified, a new grandstand seating 4000 people was erected and ladies were encouraged to attend race meetings.

He drained the evil-smelling marsh in the centre of the course and made of it ‘the Flat’ which was a picnic ground for generations of race-goers; replaced the sour, coarse grass on the running tracks which he made smooth and even under the horses’ hooves; and persuaded the VRC to buy land that he made into ‘the Hill’, a vantage point that commands one of the finest views of a day’s racing at any race-course in the world. New stables were constructed and improved facilities for the stewards and the press were introduced.

Perhaps even more importantly, Bagot was successful in lobbying the Victorian Government in support of the Melbourne Cup. In 1866 the Government declared Cup day a half-holiday for public servants and bank employees. In 1875 the Melbourne Cup was run for the first time on a Tuesday. Until that time the only public holiday in November was for the Prince of Wales’ birthday and the Cup was therefore run on that day. Soon thereafter the association with the Prince’s birthday was dropped and the first Tuesday in November became a general public holiday.

Bagot remained Secretary of the VRC until his death in 1881. His name is commemorated in the Handicap run each New Year’s Day at Flemington. He was a man of exceptionally strong character and unquestionable integrity. What he did at Flemington was emulated by racing clubs on race-courses all over Australia.

The esteem in which Bagot was held is apparent from the following obituary that appeared in the “Australasian”:

“From such small beginnings he brought the VRC to be the leading racing club in Australia and helped to lift it to its highest peak of popularity and success. He took over Flemington when it was in a primitive state and made it one of the great racecourses of the world. He promoted racing more than any other man. He really never knew what it was like to fail. “Mr Indefatigable” as he was called was at least able to witness the finest reward he would have wanted -the sight of 100,000 at the Melbourne Cup.”