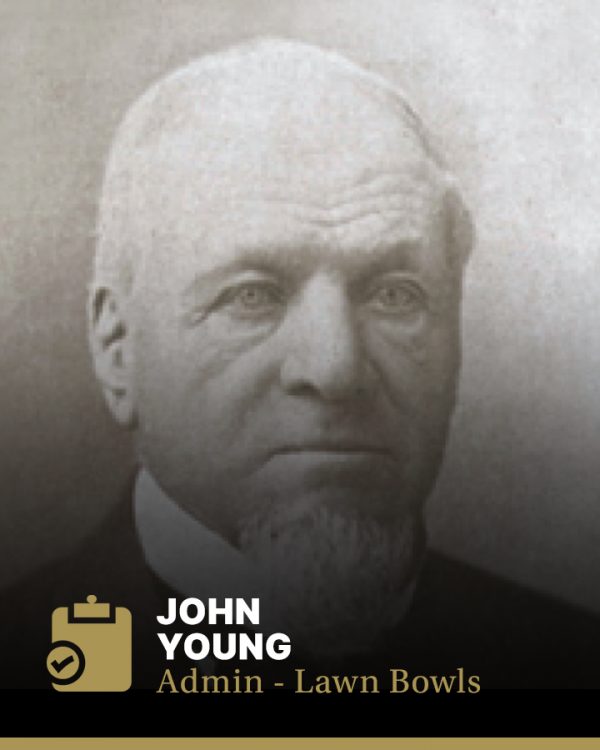 A building contractor by trade, John Young immigrated from England to Victoria in May 1855. He constructed many metropolitan churches, the interior of the Bourke Street Synagogue, and the Ballarat gaol and powder magazine. His most important building was St Patrick’s Cathedral.

In 1866 Young moved to Sydney. From 1873 to 1894 he stood unsuccessfully for parliament several times. He represented Bourke Ward on the Sydney Municipal Council from 1876 to 1887. He was interested in public health and persuaded the council to wood-block some streets. He was elected Mayor of Sydney in 1886.

Young lived at ‘Kentville’, Annandale, where he cultivated a fine garden, laid down a bowling green and provided facilities for archery, billiards and skittles. He initiated regular intercolonial bowls matches with Victoria, the first played at Kentville on April 20, 1880. He was foundation president of the New South Wales Bowling Association (the first bowling association in the world) from June 30, 1880 to 1907.

In 1889, Young, as President of the NSW Bowling Association and Charles Wood, President of the Victorian Bowling Association, travelled to England to attend the Australia versus All England Cricket series. It was resolved at a meeting of 60 bowlers at the Grand Central Hotel in London, where Young acted as secretary, that the Imperial Bowling Association be formed, with Lord Jersey (former Governor of NSW) as President. An invitation to the Australian Associations for a visit to England was then issued, with Young leading the first Australian team to Britain in June 1901. On the way home he played in Jersey City, Boston and Chicago in the USA, and Toronto and Hamilton in Canada.

He published ‘Ye Ancient Games of Bowls’ in 1899 and a marble bust of Young is owned by the Royal NSW Bowling Association. Following Young’s death, a Shield was commissioned which is now presented to the winners of the state pennant competition, “The John Young Shield”.

Large framed and with a goatee beard, Young was hospitable and courteous even under stress, but he could be blunt when the occasion warranted. His ability, practical experience, energy and lucidity made him a commanding figure.