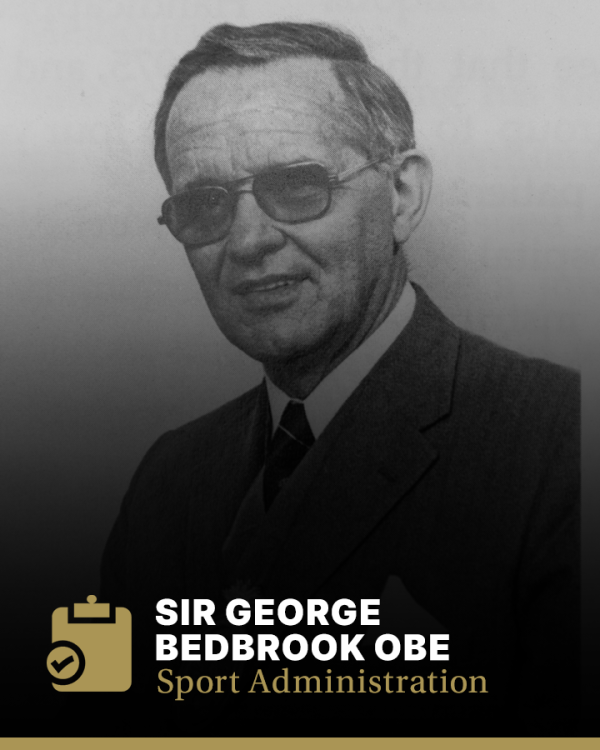 Sir George Bedbrook OBE was inducted into the Sport Australia Hall of Fame in 2022 as a General Member for his contribution to sport administration in the Paralympic movement.

A spinal injury innovator and advocate, Bedbrook led the first Australian team for athletes with a disability to the 1957 Stoke Mandeville Games, the forerunner to the Paralympics.

He was one of the leading figures in helping to found the Commonwealth Paraplegic Games, held for the first time in Perth, in 1962, and would play a leading part in various roles in taking Australian representative teams abroad to major events including the Paralympics.

He was awarded an OBE in 1965, was knighted in 1978 and was posthumously one of the inaugural inductees of the Australian Paralympic Hall of Fame in 2011.

Sir George Bedbrook devoted his life to the treatment and welfare of Australians suffering from spinal injuries as an orthopaedic surgeon and rehabilitation specialist.

Having championed the importance of combining rehabilitation with a competitive edge to assist patients both physically and psychologically, he helped to establish the Australian Paralympic movement as a result.

Bedbrook’s connection with the founder of the international Paralympic movement, Sir Ludwig Guttmann, at the Stoke Mandeville Hospital in England would play a significant role in paving the way forward for Australian athletes with a disability.

In establishing Australia’s first spinal injuries unit at Shenton Park in Western Australia in 1954, he combined rehabilitation and exercise in a ground-breaking way with a philosophy that competition and sports could improve the welfare for those with spinal cord injuries.

Guttmann’s visit to Perth encouraged Bedbrook to organise Australia’s first contingent of athletes to compete at the 1957 Stoke Mandeville Games in England, which was the forerunner to the modern Paralympics.

From those humble beginnings, the initial tour with only seven competitors (six of whom came from Bedbrook’s hospital wards) would be the catalyst for Australian athletes with a disability to compete on the world stage in the future.

Bedbrook led, organised, oversaw and raised funds for countless subsequent tours, providing a pathway for athletes with spinal cord injuries and other disabilities to fulfil their potential through the power of sport and competition.

He was a driving force in getting an Australian team to Rome in 1960 for what was the Ninth Stoke Mandeville Games, but is now considered to be the first of the Paralympic Games.

The Dunedin games proved to be the last of the Commonwealth Paraplegic Games, with Bedbrook helping to set up the Far East and South Pacific Games for the Disabled instead.

While Bedbrook’s medical achievements were many and varied, leading to a greater understanding of spinal cord injuries as well as better treatment for those suffering, he is best remembered for providing opportunities for the next wave of Australian athletes.

Bedbrook founded Wheelchair Sports WA and other state wheelchair sports organizations. He would assist outside of sport by founding the ParaQuad industries and the Paraplegic Benefit Fund with its prevention program employing people in wheelchairs.

He once said that “if a life is worth saving, it must be given the opportunity to be worth living.”

He best articulated his philosophy by saying: “Competitive and team sports provide a physical and psychological stimulus far more profitable than routine remedial exercises. Not only do these activities develop and strengthen the body musculature and promote spontaneous coordinated movements, but also of equal importance they recreate the sense of comradeship and human association and help to eliminate any self-consciousness suffered by patients in relation to their disabilities.”

It seemed fitting that one of his highest honours came in 2011 when – two decades after his death – he was one of the inaugural inductees into the Australian Paralympic Hall of Fame along with West Australian athletes Louise Savage and Frank Ponta. His impact and legacy strong in this alone with Ponta “trained” by Bedbrook and Sauvage by Ponta an impact that is still ongoing in recent times.