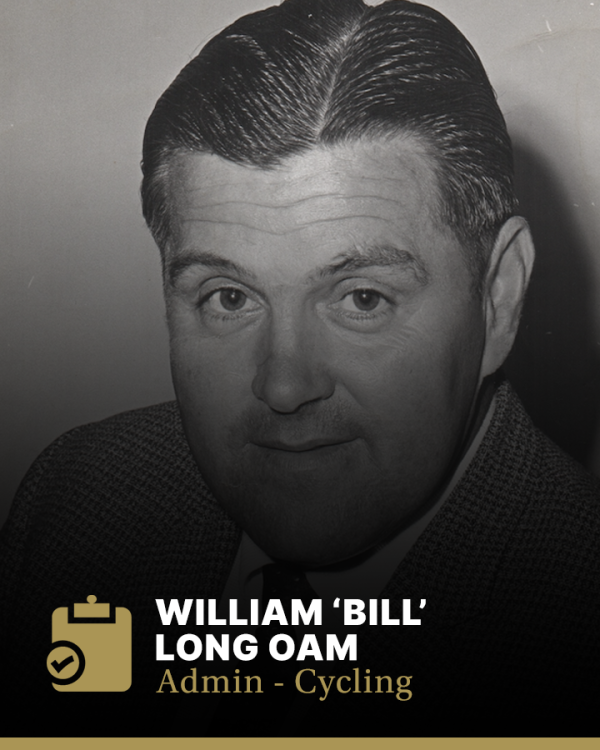 William ‘Bill’ Long OAM was inducted into the Sport Australia Hall of Fame in 1991 as a General Member for his contribution to the sport of cycling.

Bill Long promoted the sport of cycling at all levels. He has served the sport in every capacity as an amateur and professional road and track rider, club president, organiser, official, handicapper, judge, head steward, traffic controller, promoter, team manager, coach, sporting journalist and broadcaster.

A highly respected official with the world cycling countries, he has brought about many changes to international racing regulations. He promoted cycling in Australia in almost every discipline including Australia’s most traditional events, the Melbourne to Warrnambool Road Race, the Austral, the Melbourne Cup on Wheels, state, national, amateur and professional and schoolboy championships, weekly track carnivals, world record attempts, madisons, omniums and 49 Six-Day Bike Races offering rich prize-money and innovative incentive payment contracts attracting international champions to Australia. He was involved in the creation of The Sun Tour of Victoria in 1952 with Laurie Jones (founder), Ben Kerville, Harry Lovell, Snowy Munro and Chalmers Watt. Such was Long’s innovation for cycling promoting, he even got a political party, The Nationals, to sponsor an 8-day bike tour around country Victoria criss-crossing each electoral boundary.

He was the owner-editor of The Australian Cyclist magazine from 1951 to 1969.

He was a cycling commentator with the ABC from 1956 and covered more than three Olympic Games, Commonwealth Games and World Cycling Championships.

Long was invited to Japan from 1973 to 1978 as a specialist sprint coach and from 1975 had three professional cyclists win 14 medals (10 gold, 1 silver, 3 bronze) in 12 UCI World Cycling Championships (1975-1986) putting Japan on the world stage for sprint cycling excellence. One of those cyclists, Koichi Nakano, won a record 10 world professional sprint titles – the blue ribbon event – 10 years running from 1977 to 1986. In 1976 Long was honoured by the Fédération Japonaise de Cyclisme Professionnel.

He worked in the bicycle trade, first at Hartleys, as a travelling salesman before and after World War Two, then as a retailer, Progress Bicycle Company, for 37 years, mechanic, manufacturer and expo director. He was the Retail Cycle Traders Australia president in 1963, then secretary in 1964 for 24 years, steering it from a state association to a national one in 1979. In 1983 he created the Bike of the Year Award and in 1984 Bike Expo and ran 8 Expo’s, now known as Bicycling Australia Show. The RCTA awarded him Life Membership in 1985.

In his spare time, Long played cricket with various clubs including the AIF during World War Two and RSL Victoria after the war, then Collingwood (1957-1963) and Elsternwick (1963-1976) Cricket Clubs having Captained both First XI and Second XI and opening bat. Elsternwick Cricket Club awarded him Life Membership in 1975.

At one stage, circa 1969-1973, Long entered into the arena of boxing having Lionel Rose, Henry Nissen, Tony Mundine, Paul Ferreri and Rocky Mattioli under contract.