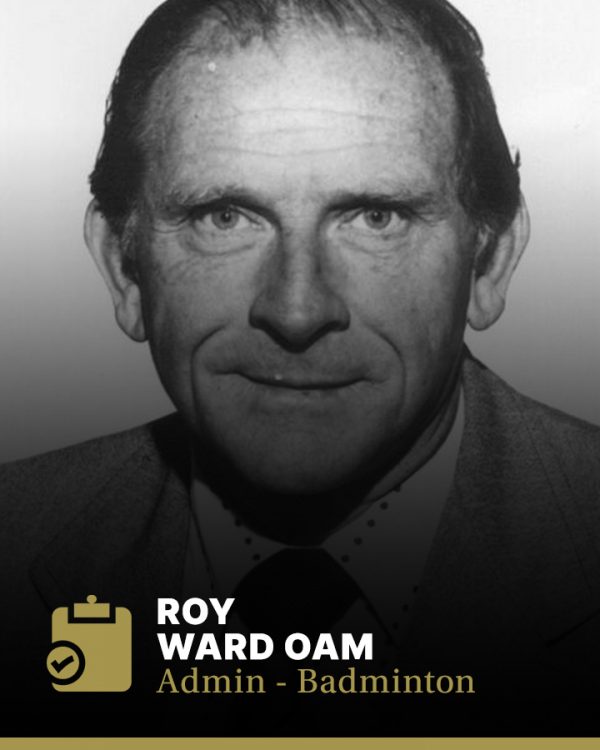 Hector Roy Ward was a significant figure in the sport of badminton for more than 50 years. He was involved heavily in three pivotal actions; the unification of the International Badminton Federation and the World Badminton Federation in 1980, the push for badminton as an Olympic sport, and opened the debate that eventually ensured the introduction of mixed doubles as a medal sport at the 1996 Atlanta Olympics.

Ward first played badminton at Melbourne Teachers’ College and the University of Melbourne. After post war years as a champion cyclist, a stint at athletics and pennant golf, he was asked to assist in the establishment of badminton at St Augustine’s Church, Mentone (Victoria).

Ward joined the Victorian Badminton Association Council in March 1959 and in May 1960, became secretary of the VBA and served in that position for 18 years until 1978. He then served as president from 1978 to 1984. He was a delegate to the Victorian Olympic Council, the Sports Council of Victoria, and he served as a delegate to the Australian Badminton Association on several occasions.

During his time with Victorian Badminton, Ward initiated the Under 21 international competition held annually in Victoria, which sees Australia, New Zealand, Hong Kong, and China compete for the Ward Cup, both in team and individual competition. He was made a life member of the VBA in 1971.

Ward was president of the Australian Badminton Association (now Badminton Australia) in 1978 then under the new company structure from 1983 until 1996. As president, he ensured that key structures were put in place and helped the organisation to achieve a full professional footing when funding became available in the early 90s. He was instrumental in the setting up of the first professional office for BA and was made a life member in 1996.

In 1987 Ward founded the Oceania Badminton Confederation to give the region a voice with the IBF. He was the first secretary of the Confederation and paid his own travel and accommodation costs due to lack of funding. His legacy will live on in Fiji with the secondary schools competing annually for the Roy Ward Shield.

In 1982 Ward established the International Badminton Umpire’s Organisation, becoming its first chairman and chief examiner, retiring in 1993. He established umpires committees and enhanced the training of court officials throughout the world. In 1993 he organised and conducted the first world conference for badminton umpires and officials in Birmingham, England.

Ward has also written a number of publications, including Badminton Umpiring in Australia in 1985. This became the textbook for training umpires and was translated into 20 languages. In 1990 he became the first non-European to be appointed editor of World Badminton, the official publication of international badminton, resigning in 1996.

In 1990 Ward was awarded the Medal of the Order of Australia (OAM) for his services to the Victorian parliament, to sport, and to the community.