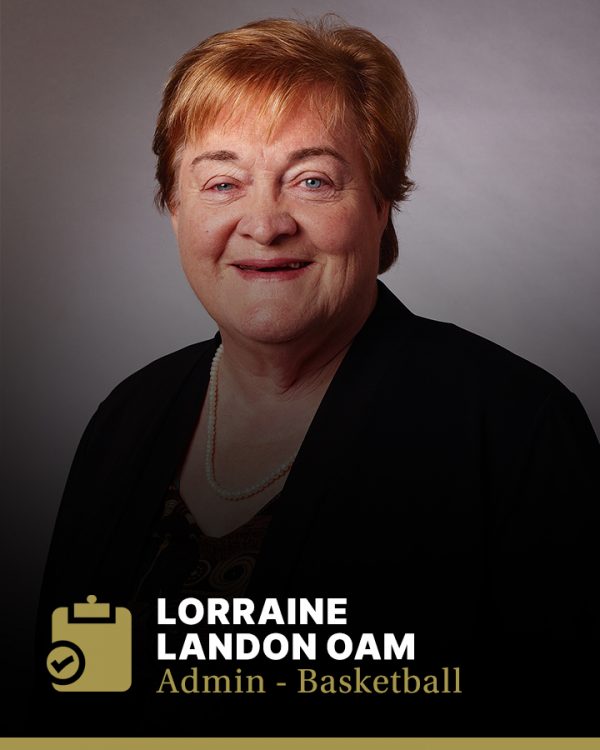 Lorraine Landon OAM was inducted into the Sport Australia Hall of Fame in 2011 as a General Member for her contribution to administration in the sport of basketball.

After a successful career as a player and coach, Lorraine Landon turned her energies to administration – first with her local Bankstown club, then on the national stage with the Sydney Kings and Flames. She managed women’s basketball teams at the 1984 and 1988 Olympics. At Sydney 2000 she was competition manager for basketball and for wheelchair and disability basketball and rugby. She has served on national and international basketball bodies for 30 years, including vice president of the FIBA women’s commission, as the only female Board member of Basketball NSW and as General Manager, Teams and Competition for Basketball Australia.

Lorraine Landon entered basketball as a player with the fledgling Bankstown Bruins team but also devoted her energies to the Bankstown club’s development — and the club flourished both on and off court. She was a member of the unstoppable Bankstown teams which won consecutive NSW State championships from 1968 to 1978.

In 1975 she was appointed general manager of the Bankstown Association and also Manager of the Bankstown Basketball Stadium – a seven court centre which to this day is the centre of Sydney basketball. She relinquished this role in 1998 and the following year became manger both the Sydney Kings and the Flames in the National Basketball League, the first time a women has held the position of running clubs in both the male and female national competitions. She held the position till 1997 during which time the Flames won two national titles and the Kings reached the finals five times.

Her success as an Olympic manager dated back more than decade however. As a volunteer she had managed the Australian national women’s team from 1984 to 98, including their Olympic debut in 1984 where the Opals and finished fourth.

She is currently vice president of FIBA’s recently-created Women’s Commission and General Manager, National Teams and Competition, Basketball Australia. She is also a Board Director of Basketball NSW – the only woman so far to have held such a position.