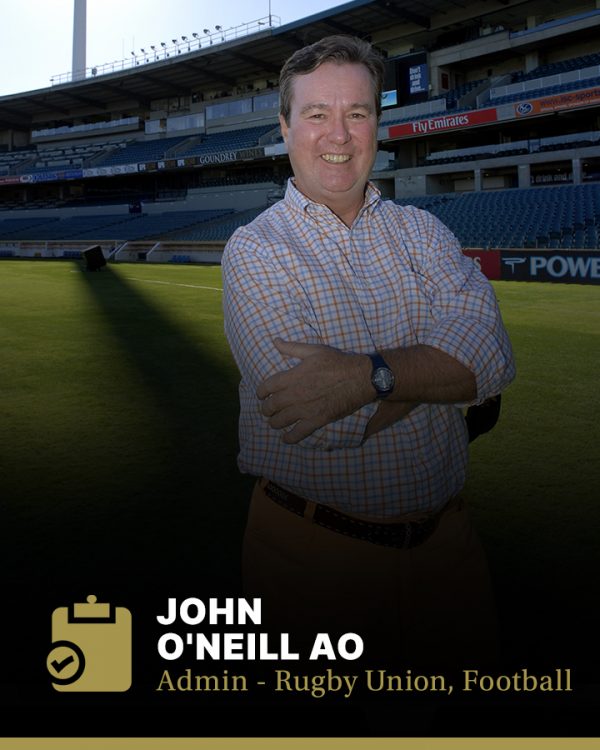 John O’Neill AO was inducted into the Sport Australia Hall of Fame in 2015 as a General Member for contribution as a sports administrator within the sports of rugby union and football.

The former Sydney banker and solicitor has successfully run two of Australia’s biggest sports, rugby union and football (soccer) as a creative and energetic Chief Executive.

He was appointed as the first Managing Director and CEO of the Australian Rugby Union in October 1995 at the start of the professional era. Over eight years he transformed the sport from one run by amateurs to one with genuine professional management. He established practices that other rugby nations sought to emulate, establishing Australia as an international power.

For much of his tenure the Wallabies were clearly the best team in the world winning the Rugby World Cup in 1999, the British and Irish Lions series in 2001 (Tom Richards trophy), Bledisloe Cup 1998-2002 and holding every trophy available in the 2001-2002 period. He took the ARU from being a financially troubled organisation to one with a strong commercial revenue and sound asset base and implemented programs that almost doubled the size of participation in rugby in Australia. Test matches were taken to Melbourne and Perth for the first time and a world record of 110,000 attended the Bledisloe Cup match in Sydney at Stadium Australia in 2000.

Under his leadership, the ARU won the sole right to host the 2003 World Cup wholly within Australia and he ran a very successful tournament which made the ARU a profit of about $40 million. 48 games were taken to 11 cities around the nation with approximately 2 million people in attendance. The Wallabies lost to England in the final in extra time.

Immediately after leaving rugby, O’Neill joined the newly-created Football Federation of Australia (the name he gave the organisation) in March 2004 and established the A League, which has become a hugely successful national competition.

He oversaw the qualification of the Socceroos for the 2006 World Cup for the first time in more than 30 years and beyond the pool round for the first time, progress attributed largely to Dutch coach Guus Hiddink, whom O’Neill had hired. As with rugby, he improved football’s revenue base substantially to make it more sustainable.

O’Neill also identified the need to move Australia into the Asian Football Confederation and personally drove the initiative, dramatically improving the competitive and financial opportunities for Australian football.

He has been credited with a major contribution toward transforming the ethos and image of football in Australia to something far more attractive to the broad community than it was.

In 2007 he returned to his old job at the ARU, leaving again in October 2012. During that time, the Wallabies moved from 6th to 2nd in the world rankings and won the Tri Nations tournament in 2011 and finished 3rd at the RWC 2011. Also, he negotiated a new broadcasting agreement in 2010 which saw the addition of the Melbourne Rebels, a team funded by private investment. Super Rugby, through the ARU’s leadership, embraced the three conference system and the Rugby Championship was created with the inclusion of the Argentinian national team.

2004: Made an Officer in the Order of Australia (AO)
2005: Received the Decoration of Chevalier de la Legion d’Honneur in recognition of his assistance in the organisation of sporting relations between Australia and France.