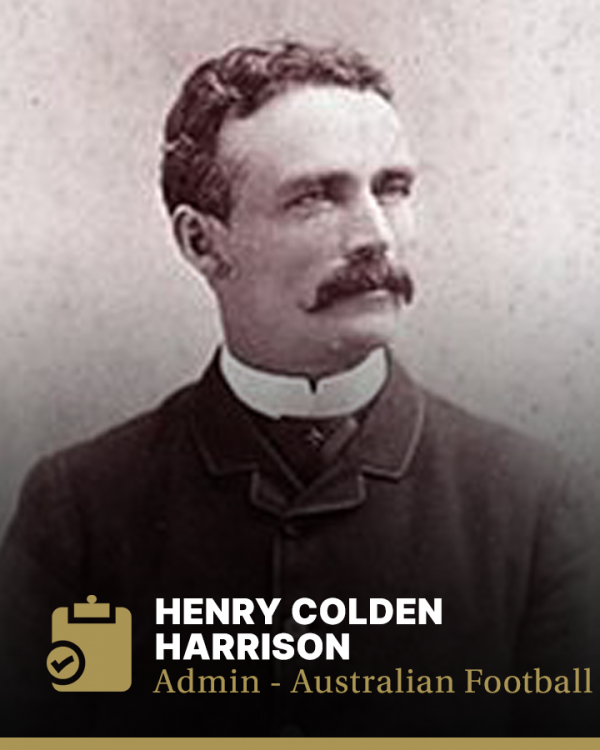 Henry Colden Antill Harrison was born in Picton, NSW, however due to his fathers poor health they eventually moved to Melbourne in 1850 where he was able to complete his formal education. He also spent time on the Ballarat and Bendigo gold diggings. Towards the end of 1853 he commenced employment at the Customs Department in Melbourne. He was inspired by his half-cousin, Thomas Wills, to become involved in football, which at first possessed few formal rules.

His first known involvement in a match was as captain in a Melbourne scratch match in September 1859. For part of 1860 he was captain of a Richmond team, and the following season he succeeded Wills as skipper of Melbourne. He was transferred to the Geelong Customs Office in 1862, captaining the local club for that season. In 1863 he returned to Melbourne, where he remained as club captain until his retirement as a player at the end of 1872.

At 179cm and 80kg, he possessed a fine physique, was a natural athlete, acquired superb fitness and was highly durable. His fearless approach to the ball, long kicking, and enthusiasm for running with the ball made him an exceptional player.

Harrison was made chairman of the Rules Committee, which re-drafted the laws of the game on May 18, 1866 and again on May 22, 1872. In 1869 he led Melbourne against the Victorian Police Force team in the first match allowed on the hallowed MCG, which previously had hosted cricket games only. His last match as a player came at the end of 1872 in a strenuous encounter against Carlton on the shores of Albert Park Lake. He was just short of his 36th birthday.

Harrison made it known that he intended to devote all his spare time to administration, the organisation of the country and inter-colonial clubs, and to help form a proper controlling body for Australian football. From 1875 until mid 1898 he was vice president of the Melbourne Football Club and in May 1877 he was elected vice president of the newly formed Victorian Football Association.

Harrison and Wills attempted to organise a promotional tour of England by the Geelong and Melbourne clubs in 1880 but were disappointed when the visit did not proceed. In 1884, after 31 years service in the Customs Department he was granted a year’s leave, which he spent in England. He attempted to establish Australian football in the ‘Mother Country’, however the locals remained uninspired. The following year he helped to amend the rules at an inter-colonial conference in his capacity as VFA delegate.

In 1888 he commenced employment at the Titles Office, initially as chief clerk, and eventually as registrar-general and registrar of titles. He was made a VFA life member in 1889 and in July 1898 the Melbourne Football Club elected him president, holding that position until the end of 1906.

Harrison did much to spread Australian football in a space of a few years, and was highly regarded as a logical rule maker. He loved the game passionately and was a keen observer of matches as late as 1926. Players became accustomed to receiving constructive advice from the ‘grand old man of football’ as they prepared for matches. He continually emphasised the importance of fair play and summarised champions as requiring resourcefulness, judgement, strength, courage, endurance, and self-control.

At the age of 87 Harrison published his autobiography, ‘The Story of an Athlete’.