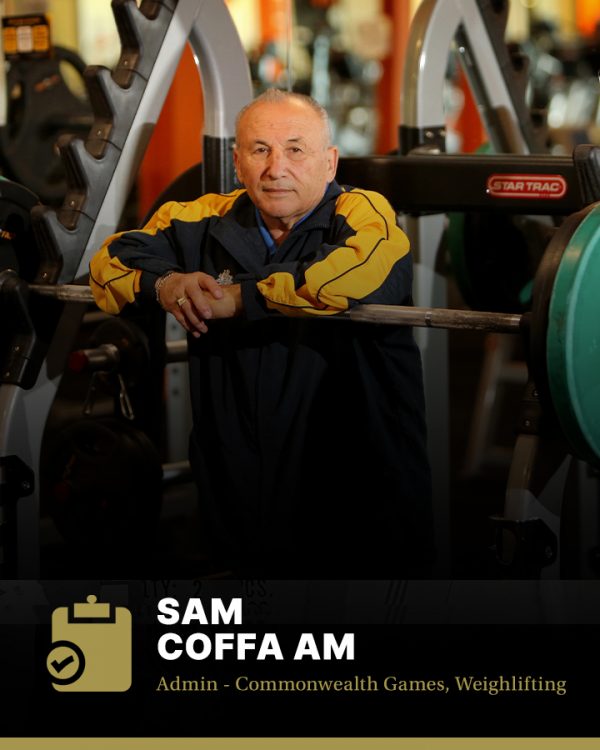 Coffa was recognised for more than 60 years of devotion to weightlifting, firstly as a competitor and then as a coach and administrator, as well as serving more than 20 years as President of Commonwealth Games Australia (CGA).

As a weightlifter, Coffa represented Australia at the 1964 world championships, the 1962 Commonwealth Games and the 1964 Olympic Games. He was also Victorian champion in his weight division from 1959 until 1969 and a six-time Australian champion.

Across a distinguished career as a sports administrator, he has held almost every leadership or administrative-level position within his chosen sport and at the ACGA.

From the time he was elected president of CGA Coffa became the driving force behind Australia’s successful bids for the 2006 and 2018 Games, serving as deputy chairman of both organising committees. The benefits derived by the Games movement and the broader community due to his vision and leadership cannot be overstated. Through the sale of its marketing rights to the Victorian and Queensland State Governments the CGA (and its Foundation), established a legacy fund valued at more than $60m, with distributions of more than $44m to member sports and their athletes, with more than $10m of that going to junior athletes under his presidency. Australia’s ability to host the Commonwealth Games twice in 12 years is largely due to Coffa’s ability to galvanise support and lead strong Games delivery partnerships and to his strong focus on putting athletes first, ensuring that Australia will always be recognised as hospitable and highly competent Games hosts. As well as his extended period at the helm of CGA, he was president of the Victorian Commonwealth Games Federation from 1986 to 1998.

As president of the Australian Weightlifting Federation from 1983 to 2007, vice-president of the International Weightlifting Federation from 1992 to 2017 and president of the Commonwealth Weightlifting Federation from 1990 to 1994, he championed change to improve gender parity. As chairman of the IWF Women’s Commission, he was instrumental in gaining approval for the introduction of women’s events at the 2000 Sydney Olympics. He was a driving force behind the introduction of an equal number of men’s and women’s categories in world, Olympic and Commonwealth competition and in making it easier for women to become involved as technical officials. Other inclusivity initiatives include championing changes to apparel regulations allowing more women of Islamic faith to compete internationally. He has been widely regarded as the technical doyen of international weightlifting, continually improving the sport with many innovations, including the implementation of the 1kg rule and removal of the bodyweight advantage rule which revolutionised the presentation of weightlifting competitions around the globe, improving the spectator experience.