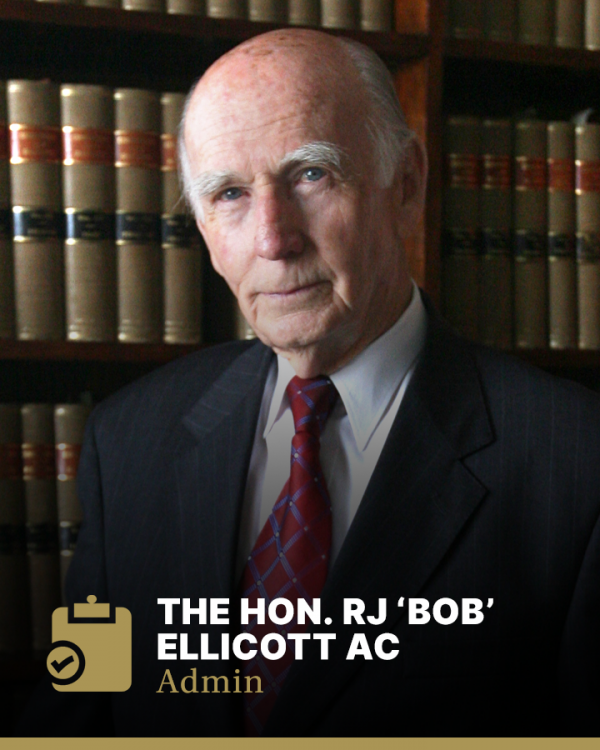 The Hon. RJ ‘Bob’ Ellicott AC was inducted into the Sport Australia Hall of Fame in 2016 as a General Member for his contribution to sports administration.

Throughout a long career The Hon Robert James Ellicott AC has made a substantial contribution to the development, integrity and professionalism of sport and the sports law industry in Australia. A former Commonwealth Solicitor General and Minister for Home Affairs and Environment in the Fraser Government, Ellicott was largely responsible for creating the Australian Institute of Sport.

Born and raised in Moree and near Cobar in country NSW, the son of a shearing contractor wool classer and grazier, Robert Ellicott boarded near and attended Fort Street High School in Sydney. He wanted to be a barrister from the age of eight, an achievement he realised when he attained First Class Honours in Law at Sydney University (together with an Arts degree).

Living through the Second World War as a teenager, Ellicott was taken by speeches on the radio by British Prime Minister Winston Churchill and Australian Prime Minster John Curtin, inspiring a further ambition to enter public service.

Following graduation Ellicott was admitted to the NSW Bar in 1950 and rising through the ranks became a Queen’s Counsel and was appointed Commonwealth Solicitor General from 1969 to 1973.

Following his election to Federal Parliament in the NSW seat of Wentworth in 1974, Ellicott became the first Attorney General in Malcolm Fraser’s liberal government until his resignation from that position in September 1977.

He was reappointed in the third Fraser Ministry as Minister for Home Affairs and Minister for the Capital Territory. It was during this time that the concept of a sports institute was conceived. As Minister for Home Affairs Ellicott was asked by Malcolm Fraser to do something about elite sport following Australia’s poor performances at the 1976 Montreal Olympic Games and the Commonwealth Games in 1978. He adapted the idea of an Institute of Sport to the then circumstances in Canberra. His vision of an Institute as a centre of excellence for Australia’s athletes was realised on Australia Day 1981 when the AIS was officially opened.

Following retirement from Parliament in 1981, Ellicott served time on the bench of the Federal Court, practised as a Queens Counsel at the Sydney Bar and played a prominent role in many significant sports cases such as the Super League case as lead counsel for the ARL. Since 1986 he has been the Patron of Gymnastics Australia.
He was a long standing member of the IAAF Arbitration Panel as the Oceania representative and has been a member of the Court of Arbitration for Sport since 1995. In the latter capacity he has been a member of the CAS ad hoc Divisions for multiple Olympic Summer and Winter Games and Commonwealth Games events and as a Judge of the Oceania Division of CAS.

A significant figure in the Australian and New Zealand Sports Law Association, Ellicott was awarded the Order of Merit by the Australian Olympic Committee in 2006.