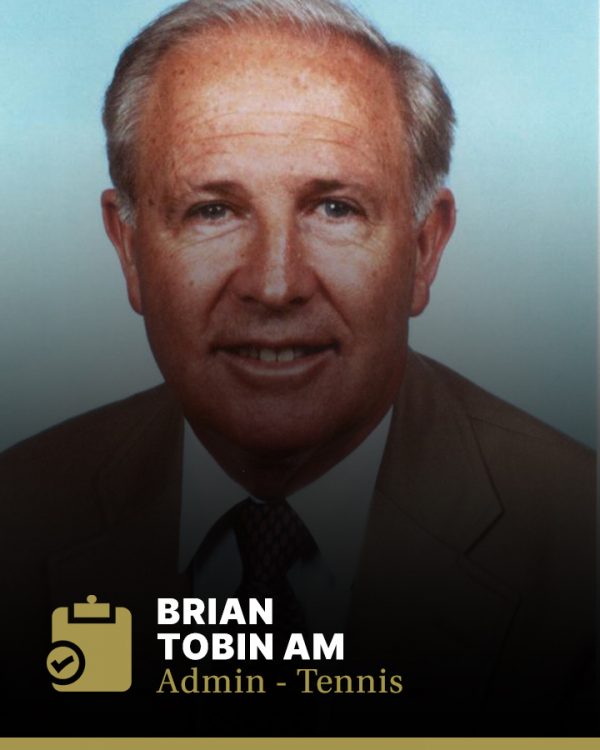 Brian Tobin AM was inducted into the Sport Australia Hall of Fame in 1991 as a General Member for his contribution to administration in the sport of tennis.

Tobin devoted over 45 years of his life to the sport of tennis and was a member of the Lawn Tennis Association of Australia (now Tennis Australia) from 1964, serving as honorary president from 1977 and becoming its first full-time president in 1982 until 1989. During this time he oversaw the building and opening of the current stadium for the Australian Open (now named Rod Laver Arena) in 1988. The stadium features a retractable roof, thereby eliminating match cancellations due to inclement weather. He worked tirelessly to reinstate the (Ford) Australian Open as a true grand slam tournament.

Tobin was involved with the International Tennis Federation (ITF) for over 20 years, serving as the first fulltime president from 1991 to 1999 (he was the first executive vice-president of the ITF in 1989). Upon his retirement in 1999 he was designated as lifetime honorary president. Under his leadership, the ITF and its principal activities, including the worldwide operation of the Davis Cup, Fed Cup, and Olympic tennis, were greatly enhanced and developed. He was chairman of the ITF Davis Cup Committee from 1989 to 1999, and chairman of the ITF Olympic Committee from 1989 to 2001. His business foresight and progressive thinking prepared the ITF to carry out its mission as a governing body, ensuring future growth of the organisation.

In 1986 Tobin was made a Member of the Order of Australia (AM), and in 1999 received the Olympic Order from the IOC. In 2003 Tobin was inducted into the International Tennis Hall of Fame in Newport, Rhode Island.