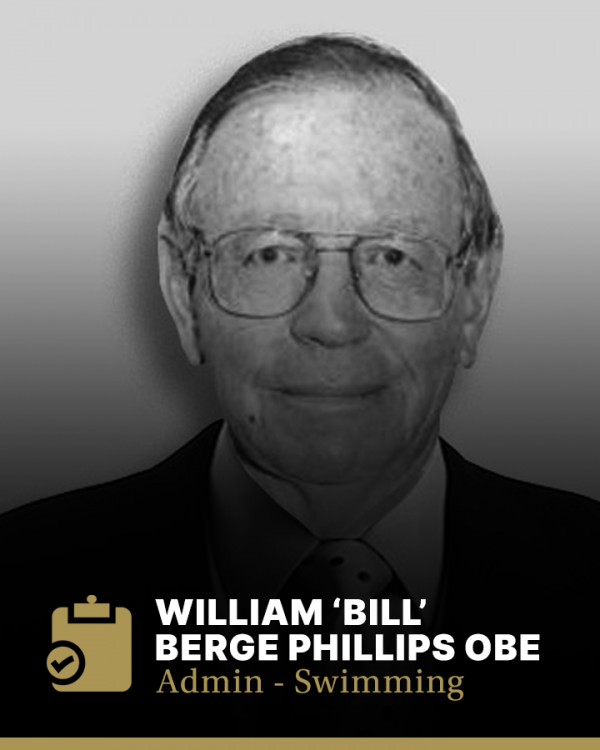 For over 40 years, William ‘Bill’ Berge Phillips served the aquatic disciplines equally and distinguishably. As a leader and administrator, he worked tirelessly with a focus to get the job done. During his tenure from the mid 1940s to his official “”retirement”” in 1990, swimming in Australia and the world took on numerous changes, many of which were influenced by Phillips.

Berge Phillips was a solicitor and active water polo player who had begun his career as an administrator at the age of 15, when he became a delegate from the Abbotsford Club to the New South Wales Amateur Swimming Association (NSWASA). At 18, he was appointed as a costume steward at state championships. He loved a fight, and sailed into his first public controversy in 1934, aged 19, when he refused to allow the American diving champion Frank Kurtz to perform in Sydney until he donned a regulation swimsuit.

Berge Phillips was an Executive Member of the Australian Swimming Union (ASU) from 1940 to 1973, serving as Secretary Treasurer from 1941 to 1967 and President from 1967 to 1970. He was destined to become one of the most powerful men in Australian and international swimming, becoming a Bureau member of the Federation Internationale de Natation Amateur (FINA) from 1948 to 1976 in which time he became an honorary life member. From 1952 to 1964, he served as Vice President and as President from 1964 to 1968, becoming the first Australian to head an international governing body. He was founding President of the General Assembly of International Sports Federations from 1966 to 1969.

During his time as president of FINA, additional swimming events were added to the Olympic list in 1968, including men’s and women’s 200m freestyle, 100m breaststroke and 200m individual medley, the men’s 100m backstroke and 100m butterfly and the women’s 800m freestyle, 200m backstroke and 200m butterfly, a total of 11 events, the most added at any one time in the history of the sport.

At the 1968 FINA Bureau meeting, Berge Phillips appointed the first committee to establish world championships for aquatics. This vision was realised as the first World Championships of Belgrade, Yugoslavia in 1973.

Berge Phillips served as Olympic referee of swimming at the 1960 Rome Olympics, 1964 Tokyo Olympics, 1972 Munich Olympics, and the 1976 Montreal Olympics. He served on the Olympic Jury of Appeal and Management Committee for Swimming at 12 Olympic Games for 44 years, from London in 1948 to Barcelona in 1992, serving as Committee Chairman in 1968. He served as chief judge for swimming at the 1948 London Olympics, 1952 Helsinki Olympics, and the 1956 Melbourne Olympics. He was chief judge for the Water Polo Commission in Tokyo, Munich, and Montreal.

At the 1956 Melbourne Games, Berge Phillips was the Arena Manager for swimming and a member of the Organising Committee. He also served as an Australian Olympic Committee Council Member from 1946 to 1977, and manager-coach of the 1948 Olympic swimming team.

He was a member of the International Water Polo Committee from 1962 to 1964 and 1972 to 1976, and received the FINA gold medal in 1968 and Gold Service Award in 1977. He served as an international referee for each of swimming, diving and water polo.

As a teacher, he organised and served on numerous learn-to-swim committees within NSW, co-authoring the Learn-to-Swim Instruction Book in 1954. He was the first Australian to serve on and become involved with the international process of administering the four aquatic disciplines.

In 1976, Berge Phillips became an Officer of the Order of the British Empire (OBE) for his many years of service to the Commonwealth and the world of swimming. In 1983 he was honoured by the International Olympic Committee with the Silver Award of the Olympic Order.