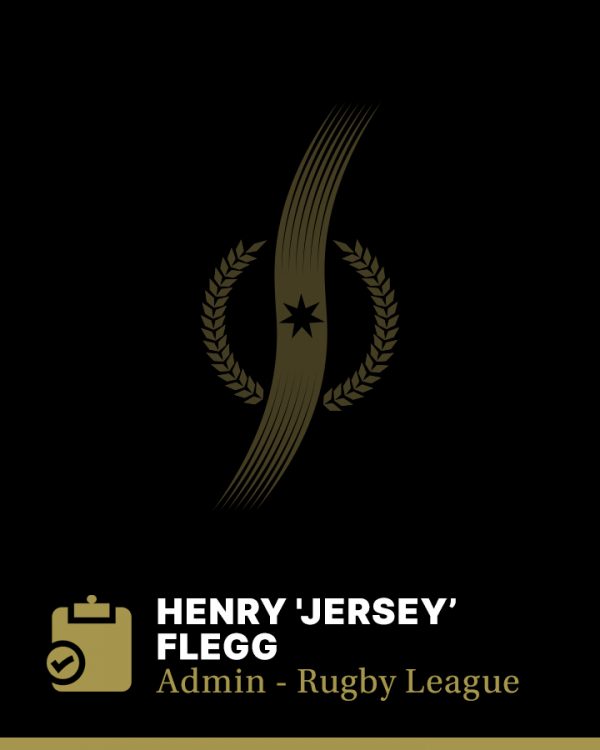 Harry ‘Jersey’ Flegg holds a unique place in the history of rugby league in Australia. Born in England, he immigrated to Australia as a youngster and was with rugby league in the beginning in 1908, and was still there, planning and guiding, 50 seasons on when the game celebrated its Golden Jubilee.

For more than half a century of rugby league’s life, he was a dominant figure in the game, championing its cause and helping guide its destiny. A hard-working and strong-tackling rugby union forward, he had played for the Adelphi club in the 1890s, then for Sydney. In 1902 he represented the state against Queensland.

When a players’ revolt led to the foundation of the New South Wales Rugby Football League in January 1908, he was elected Secretary of the Eastern Suburbs Club and founding delegate to the league, of which he was later made a life member. He played with Easts in 1908 and was in their front row on the day premiership rugby league began. He retired in 1909 to become state selector, holding the position for a record 19 years. He was also sometime metropolitan and Australian selector, and in 1922 managed the state team which toured New Zealand.

In 1925 Flegg became Vice President of the league and Member of its Judicial Committee. Flegg was elected President in 1929 and was an active and guiding leader for the next 31 years.

The Depression reduced the league’s gate receipts from £24,487 in 1928 to £15,500 in 1931 and for the next 15 years revenue remained low. A man of ‘inflexible determination…a rugged and likeable character, forthright in his utterances’, Flegg managed the league’s affairs shrewdly. From 1937 to 1958 he was a Director of the New South Wales Leagues’ Club, and for 17 of those years was Chairman. As Chairman of the Australian Board of Control from 1941 until 1960 he was noted for exercising his casting vote without state favouritism. He was later elected a life member of the English and French leagues.

Known in later years as league’s ‘Grand Old Man’ or just ‘The Old Jerse’ he was a remarkable character, later living in the premises of the Leagues’ Club, which he had helped to build. He remained President of the state league and Chairman of the Australian Board until his death in 1960.

On his death, the Leagues Patron Dr. H H Evatt commented: “Jersey was one of the most remarkable figures in Australian sport. He was a magnificent athlete as a young man, and a magnificent administrator.” His contribution to rugby league extended over half a century and was recognised when the H. ‘Jersey’ Flegg Cup was first contested in 1961.