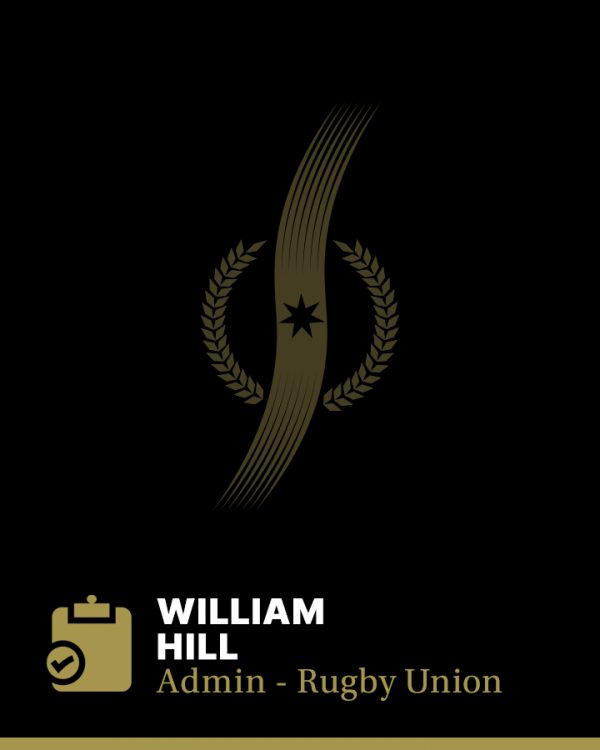 William ‘Bill’ Hill played 50 first grade matches for Newtown from 1902 to 1906, and the first of his three matches for New South Wales against Queensland in 1906. He retired from the game in 1906 and was subsequently appointed secretary to the NSW Rugby Union.

During his 12 years of secretarial work, he organised tours to and from all the rugby nations at the time, chief among them being the historic matches in Sydney against New Zealand, those of the Wallabies to England, France and America in 1908/09, the Waratahs to America, and the big international carnival in Sydney in 1910.

Hill refereed the match between All America and New Zealand at Berkeley, California on November 15, 1913, a match the New Zealand Rugby Union gave Test status.

He was secretary to all the Australasian Rugby Conferences from 1906, and in 1912 he became a Member of the International Rugby Board, which at the time had representation from the English, Scottish, Irish, Welsh, South African, and French unions. The outcome of the conference was the arrangement of a series of international tours, but with the outbreak of the war, these did not eventuate until later.

Hill took it upon himself to maintain his interest in rugby during World War I. When league was introduced nearly all the best players were lost to the new code, and during the war, Hill with H Y Braddon and others, devoted themselves to the education of the boys who would later represent rugby union.

He was elected President of the NSWRU in 1933 and at an English Conference in 1936 a ten year programme was drawn up for the sport, however this was cancelled due to World War II.