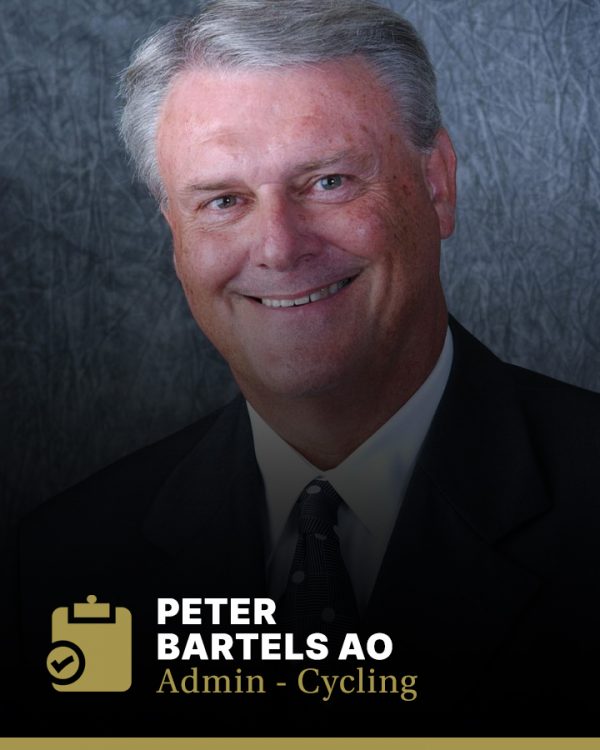 Peter Bartels AO was inducted into the Sport Australia Hall of Fame in 2002 as a General member for his contribution to sports administration.

Bartels made a substantial contribution to Australian sport from his time as an elite athlete through to his present role as Chairman of the Australian Sports Commission and has played an integral role in linking sport, government and the private sector for the benefit of all sports from the grass roots community level through to elite international competition.

Bartels has never lost his passion for cycling both in his support for the athletes and his involvement with the sport’s administration. He has been active in attracting corporate support to the sport and bringing about reform in its administration.

Bartels has been the Patron, vice-president, and Board member of the Australian Cycling Federation for over 16 years. He was prominent in restructuring the governance and management structure of the Federation and was formerly a significant contributing member of a number of Cycling Australia’s committees, including the High Performance Management Committee, Track Commission, and Marketing Committee.

Cycling’s international governing body, the Union Cycliste Internationale (UCI) has also benefited from Bartels’ valuable contribution. He has been a regular delegate for Australia and the Oceania Confederation to the UCI, most importantly during the time of the amalgamation process between the world professional and amateur cycling bodies and is a member of the UCI Advertising and Marketing Commission. He was also involved in a task force appointed by the UCI charged with reforming international track competition.

Bartels first joined the Board of the Australian Sports Commission in May 1992. He served on the Board during the final stages of Sydney’s successful bid to host the 2000 Olympic Games and the subsequent introduction of the Olympic Athlete Program – two significant milestones in the development of the current highly successful Australian sports system.

Rejoining the ASC Board and appointed as its Chairman in November 1997, Bartels steered the Commission through the vital last three years of the Olympic Athlete Program, during which time it was fine tuned to produce the wonderful results seen in Sydney at the 2000 Olympics. He has participated in meetings of Strategic Planning, Budget, Audit and Emoluments sub-committees of the ASC and has played a highly successful role in successfully lobbying Government, up to its highest levels, on behalf of sport.

His experience and standing in the business community, plus his personal commitment and generosity, has resulted in his being a major influential contributor to the development of Australian sport.

Bartels won cycling gold at the 1962 Perth British Empire and Commonwealth Games in the 1000m Time Trial and won 16 Victorian championships and seven national championships during his career. In 2004, Bartels was made an Officer of the Order of Australia (AO) for his services to sport.