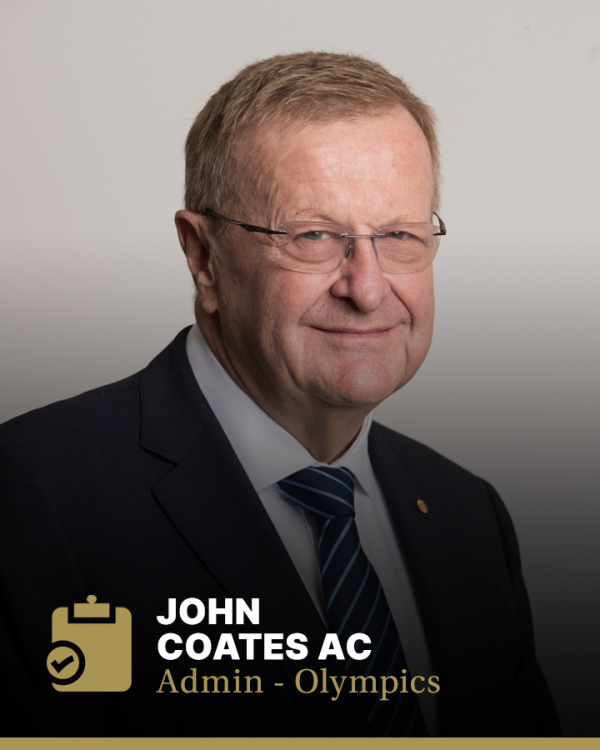 John Coates AC was inducted into the Sport Australia Hall of Fame in 1993 for his contribution to sport administration in particular the Olympic Movement.

Coates joined the International Olympic Committee as a member in 2001 before joining the Executive Board in 2009 and being appointed Vice President in 2013 and again in 2020. Coates held many roles during his tenure at the IOC including Olympic Games Coordination Commissions, Media Rights Commissions and various Legal Commissions.

Outside of the Olympics Coates served on the Board of the Australian Institute of Sport and the Australian Sports Commission, a council member of the International Rowing Federation and Chairman of William Inglis & Son Ltd.

After ten years being involved with rowing on the water as a coxswain and then coach, Coates began an administrative journey in 1971 that saw him rise in the ranks of the International Olympic Committee. Coates would join the Australian Rowing Council as a Director in 1971 and eventually became the President in 1983 until 1985. In 1992 he would become a council member of FISA, now known as World Rowing Federation, and would sit on the council until 2014.

Coates’ first involvement in the administration of the Olympic Movement began in 1980 as a member of the New South Wales Olympic Council before two years later joining the Australian Olympic Committee as a member of the Board. Coates was appointed Vice President in 1985 and eventually in 1990 he would be the President of the AOC. In Coates early years at the AOC he would hold senior positions on Australian Olympic teams going to the 1976 Montreal, 1980 Moscow and 1984 Los Angeles Olympic Games.

Coates was appointed Chef de Mission for the Seoul 1988 Olympic Games and filled this role at the 1992 Barcelona, 1996 Atlanta, 2000 Sydney, 2004 Athens and 2008 Beijing Olympics. Coates influence saw a number of bids submitted to host the Olympic Games including the the Brisbane 1992 Olympic Games Bid, Melbourne Olympic Games Bid Strategy Committee, and the successful 1991-1993 Sydney Olympics 2000 Bid Limited and Brisbane 2032 Olympic bid. Coates was the senior Vice President of the Sydney Olympic Bid committee and then the Sydney Organizing Committee for the Olympic Games, he would play a key role in bringing the 2000 Olympics to Australia and its eventual delivery.

Following the Sydney Olympics in 2001, Coates became just the fourth Australian to be join the International Olympic Council when he was appointed to the Judicial Commission and the TV Rights and New Media Commission. Coates served as Vice President of the IOC on two occasions the first in 2013 and then again in 2020. He was a member of the Coordination Commission for the London 2012 and Rio 2016 Olympics and the Chair of the Coordination Commission for the 2020 Tokyo Olympic Games.

Coates sat as a member across several commissions during his time at the IOC including the Juridical Commission, Sport and Law Commission, Legal Affairs Commission and Olympic Games Study Group. His protection of the Olympic brand saw him sit within the TV Rights and New Media Commission and the Delegate Member for Broadcast rights for Oceania. Coates ultimately played part in updating the Olympic Movement being the Chair of the IOC Vice Presidents’ Working Group for simultaneously awarding 2024 and 2028 Games, 2026 Olympic Winter Games candidature process review, Agenda 2020/New Norm Olympic Games Delivery Executive Steering Committee and the Working Group for Future Games Elections all of which changed the way the bidding process for hosting an Olympic operated.

Outside of the Olympic Movement Coates, a qualified lawyer, was a member of the International Court of Arbitration for Sport in 1994, Vice President in 1995 and then the President by 2011. He sat as a Director of the Australian Institute of Sport in 1985 and the Deputy Chairman in 1986 until 1989 during this time he also sat as a member of the bord for the Australian Sports Commission in 1987 and becoming the Deputy Chairman in 1989 holding the position until 1998. Coates also helds the position of Chairman at Inglis (William Inglis & Son Ltd).