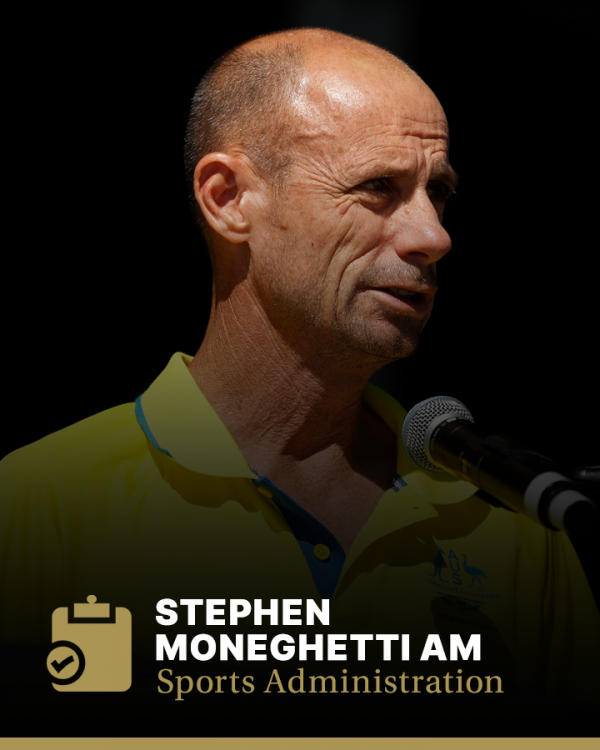 Steve Moneghetti was inducted into the Sport Australia Hall of Fame in 2021 as a General Member for his contribution to sport through administration.

Steve Moneghetti was one of Australia’s most respected marathon runners in a career spanning four Olympic Games, four Commonwealth Games and six World Championships. But for all of his considerable achievements as an athlete – a clean sweep of medals at the Commonwealth Games, including gold in 1994 in Victoria, Canada, a bronze medal at the Athens 1997 World Championships, and a fifth placing at the Seoul 1988 Olympics – it was his extraordinary contribution to sports administration and the promotion of athletes’ welfare which has made the most significant impact.

His selfless contribution, not only to his chosen sport of athletics, but to numerous sports disciplines, has left an indelible mark on Australian sport. In numerous roles ranging from captain of the Australian athletics team, to the Chef De Mission at three Commonwealth Games, and to administrative positions which have helped to provide better facilities and greater support for athletes, Moneghetti has made a lasting legacy for future generations.

Hailing from regional Victoria, Moneghetti first cut his teeth in an under 14s cross-country race in Burrumbeet, honing his craft with Ballarat Harriers before moving to Ballarat YCW. It wasn’t long before he had become one of the most promising distance runners in the country.

Moneghetti competed in 29 national teams, starting as a cross country and 10,000m athlete before becoming one of Australia’s greatest marathon runners. He won a bronze medal in his first marathon – the Edinburgh 1986 Commonwealth Games – as part of four appearances at the Commonwealth Games, including winning a gold medal in Victoria, Canada in 1994.

He competed in four Olympic Games marathons, with his best performance being fifth in Seoul in 1988. Fittingly, his last race representing Australia was on home soil when he finished 10th at the Sydney 2000 Olympic Games, less than a week after his 38th birthday.

If that had been the end of Moneghetti’s contribution, it would have been sizable enough. But in the back end of his athletic career, he displayed a passion for promoting the welfare of athletes as well as innovation and engagement he would show later in leadership roles.

His belief that athletes must always be put first saw him and Commonwealth Games Australia CEO Perry Crosswhite express their concern about the cauldron like conditions that athletes had to wait in before the Opening Ceremony ensuring their welfare was first and foremost. Moneghetti arranged for the Gold Coast Games for the athletes to march at the front of the parade which culminated in a magic moment when flag bearer Mark Knowles walked back through the team, ensuring all competitors were able to touch the flag.

As a board director of Sport Australia, including as deputy chair, and during three terms as Chair of the Victorian Institute of Sport, Moneghetti played a key role in promoting the welfare of athletes at all levels as well as helping to fund and facilitate numerous projects to improve the facilities and conditions for Australian sportsmen and women.

He has also given his time to countless charities, community and non-for-profit organisations. He has also been a driving force since the inception of the Run For the Kids community participation event, which has raised more than $18 million for the Royal Children’s Hospital in Melbourne.