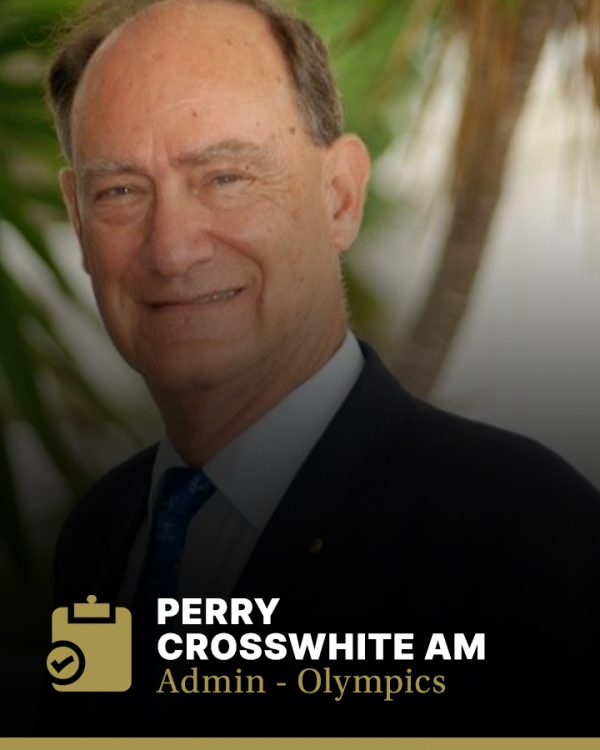 Perry Crosswhite AM was inducted into the Sport Australia Hall of Fame in 2003 as a General Member for his contribution to sports administration (Olympic).

Perry Crosswhite has achieved outstanding results as both an athlete and a sports administrator, and has made a major contribution to Australian sport. He has been instrumental in devising, establishing and administering programs which have supported the resurgence of Australian sporting performance during the last three decades.

He has played a significant role in the change in approach in the way that Australian sportsmen and sportswomen (especially amateurs) have been supported by governments and the private sector. For the past 30 years Crosswhite has had a distinguished career in sports administration at all levels. He is currently the Chief Executive Officer of the Australian Commonwealth Games Association (ACGA).

Crosswhite arrived in Australia from America in 1969 as a guest of the Melbourne Tigers basketball club coached by Lindsay Gaze and became an Australian citizen in 1971.

As a player and leader in the sport of basketball in Australia, Crosswhite influenced the development of the sport at the highest level from part time management in the early 70s to the establishment of a national league with paid players in the 80s.

Crosswhite was a pioneer in the establishment of professional sports administration in Australia. He was the first professional Recreation/Sport Officer employed by the Victorian government in 1973, a time when the Victorian Department of Youth, Sport and Recreation was the acknowledged leader among state governments in developing and establishing assistance programs for athletes and sporting bodies, and for the construction of sporting facilities.

Crosswhite helped design, implement, and administer programs that would expand opportunities for the participation of Australians in sport, such as the Life. Be In It, Aussie Sports, and Sport for All.

This was a period of change for the AOC and Crosswhite was a part of the professionalisation of the Committee as well as part of the Sydney 2000 Olympic Bid effort. He successfully undertook programs that were part of the bid strategy which was ultimately successful in September 1993.

In 1995 Crosswhite joined the ACGA as its first General Manager. He became responsible for the organisation and preparation of the 1998 Australian team which competed in Kuala Lumpur. During the Games he served as Team General Manager.

At the same time he devised and implemented the domestic bid process for the Australian candidature for the 2006 Commonwealth Games. This was completed in 1996 with Melbourne being declared the bidding city. He was an instrumental part of the bidding team which was successful in having Melbourne named as 2006 Games host.

At the commencement of 1999, Crosswhite became responsible for all ACGA matters including all Commonwealth Games programs culminating in the 2002 Manchester Commonwealth Games where the Australian team again broke it’s previous performance records. He did an outstanding job as Team General Manager during these Games.

Crosswhite’s international experience and expertise in events organisation, and team management was recognised by his appointment to the Commonwealth Games Federation (CGF) Co-ordination Committee for the 2002 Manchester Commonwealth Games. More recently he has served as a member of the Federation’s Assessment Commission for the 2010 bids. He is also a member of the CGFs Marketing Committee.

Crosswhite has had a major impact on the position and way in which the Australian Commonwealth Games Association undertakes the preparation and participation of the Australian team. This is a change from a travel/uniforming role to one of shadow team development/preparation and extended support and benefits to athletes and former team members.