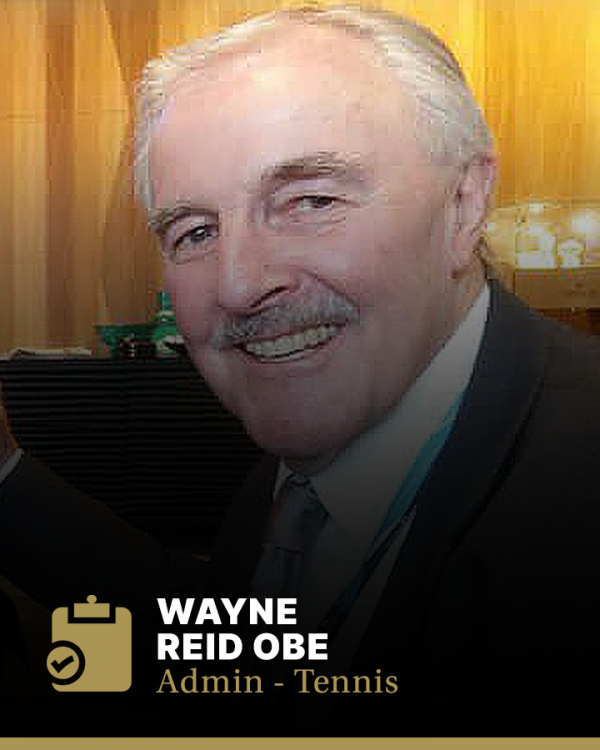 Wayne Reid OBE was inducted into the Sport Australia Hall of Fame as a General Member in 1989 for his contribution to administration in the sport of tennis.

Wayne Reid was just 31 when he became president of the Lawn Tennis Association of Australia (LTAA) in 1969, the year that marked the beginning of Open tennis. He took the LTAA from an amateur body to one that was able to successfully cope with the demands of a professional sport. He introduced the concept of sponsorship to tennis, preparing the Association for the years ahead as the level of prize money increased. He was indeed a forward thinking, progressive tennis administrator.

Reid played championship tennis until work commitments forced his retirement from active competition soon after his 22nd birthday. On that occasion, tennis fans watched his shock four sets birthday win in the quarter-final of the 1960 South Australian Open, knocking out then Wimbledon singles runner-up, Rod Laver. Unlike the champions of the 1950s and 60s Reid played overseas only on two occasions, both involved six-week visits to Wimbledon.

Tennis had been a sport run by a stuffy group of conservatives who were seen to have little rapport with young on-court champions. Reid bridged the generation gap and later overcame resistance to the idea of running an open tennis championship. He inherited the LTAA presidency when the organisation was near bankrupt and left it nine years later in good shape and with cash reserves of more than $367,000. Reid also helped establish the Australian Davis Cup Tennis Foundation and the Asian Tennis Circuit of which he was foundation chairman.

After resigning from the LTAA, Reid joined the committee of the Melbourne Football Club and a month afterwards, in October 1978, was appointed club president, a position he held for two years. He was later approached by representatives of five Victorian Football League clubs asking him to contest the 1988 election for league president. He turned it down after learning that Alan Aylett was standing.

He was also the inaugural president of the Confederation of Australian Sport, a position he held for eight years, and the International Assembly of National Organisations of Sport, again for eight years. Reid was also a founding director of the Australian Institute of Sport and a Member of the Federal Government Sports Advisory Council.

In 1977 Reid was made an Officer of the Order of the British Empire (OBE) for his service to tennis administration.