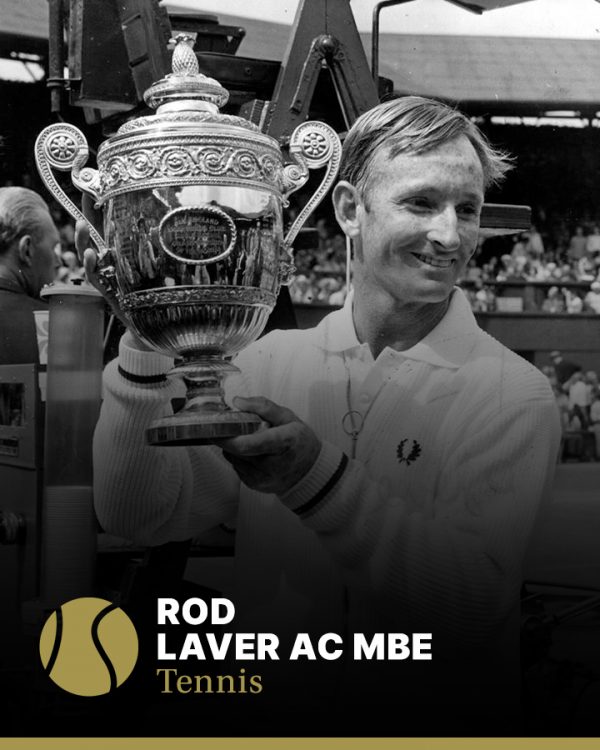 Rodney ‘Rod’ George Laver AC MBE was inducted into the Sport Australia Hall of Fame in 1985 as an Athlete Member for his contribution to the sport of tennis. He was elevated as a Legend of Australian Sport in 2002.

Nicknamed “Rocket” by Australian Davis Cup captain Harry Hopman, Rod Laver is the only player in tennis history to have twice won all Grand Slam singles titles in the same year – first as an amateur in 1962, then again as a professional in 1969. For this achievement, Laver is considered by many tennis fans to be the greatest player of all time.

Although of only medium build (175cm), Laver developed a complete serve-and-volley game, with aggressive groundstrokes to back it up. He was technically faultless, from his richly varied serve to his feather-light touch on drop volleys plus a backhand drive carrying destructive topspin when needed. His wristy groundstrokes on both flanks were hit with topspin, an innovation in the 1960s, as was the attacking topspin lob, which Laver developed into a weapon, inspiring a wave of heavy-hitting topspin practitioners in the 1970s. Laver was very quick and mobile, and had a gigantic left forearm.

As an amateur, Laver was a somewhat flashy player, often a late starter. When he turned professional, he learnt to control his adventurous shotmaking, and to integrate percentage tennis into his game. In his prime, he could adapt his style to all surfaces and to all conditions. Laver had a great record in five-set matches, often turning things around with subtle changes of tactics or by simply hitting his way out of danger.

Laver was a young boy when he left school to pursue a career in tennis that would end up lasting 23 years. His initial international triumph came during his first trip abroad in 1956, when he won the US junior championship at 17. In 1957 he won the Australian junior championship. His first major singles title was the Australian Championships in 1960, where he beat fellow Australian Neale Fraser in a titanic five-set final 5-7 3-6 6-3 8-6 8-6. He then captured his first Wimbledon singles crown in 1961 defeating Charles McKinley 6-3 6-1 6-4.

Laver turned professional after completing the Grand Slam in 1962. He quickly established himself among the leading professional players, delighting crowds with duels against Pancho Gonzales and Ken Rosewall. During the next seven years, Laver won the US Pro Championships five times, including four in a row from 1966 to 1969.

In the first half of 1963, Laver was beaten by both Rosewall and Hoad. Hoad, in fact, won the first eight matches against Laver, Rosewall 11 out of 13. By the end of the year, however, with three tournament titles, Laver had established himself as the number two professional player behind Rosewall. In 1964 he won the two most prestigious titles, the US Pro over Gonzales and the Wembley Pro over Rosewall.

In 1965 he became clearly the number one professional player, winning 15 titles. In ten finals he met the still dangerous Gonzales, and won eight of their clashes. In 1966 he won ten important tournaments, again including the US Pro and Wembley crowns. In 1967 he won a record 18 titles, including the Wimbledon Pro, US Pro, Wembley Pro and French Pro, which gave him a clean sweep of the important Pro titles. The tournament in 1967 on Wimbledon’s centre court was the only Pro event ever on the sacred lawns and paved the way to Open tennis. Laver beat Rosewall in the final 6-2 6-2 12-10.

With the dawn of the Open Era in 1968, professional players were once again allowed to compete in the Grand Slam events. Laver became Wimbledon’s first Open Era champion in 1968, beating fellow-Australian Tony Roche in straight sets 6-3 6-4 6-2.

In 1969, Laver achieved the Grand Slam for a second time, sealing the achievement with a four-set win over Roche in the US Open final 7-9 6-1 6-2 6-2. He defeated Andres Gimeno 6-3 6-4 7-5 in the Australian final, and Ken Rosewall 6-4 6-3 6-4 in the French final. In beating John Newcombe in four sets in the Wimbledon final 6-4 5-7 6-4 6-4, he captured the title at the All England Club for the fourth consecutive time he’d entered the championship (and reached the final for the sixth consecutive time). He set a record of 31 consecutive match victories at Wimbledon between 1961 and 1970, which lasted until 1980 when it was eclipsed by Björn Borg. He had an incredible record that year, winning 17 of the 32 singles tournaments he entered and compiling a 106-16 win-loss record.

In the early 1970s Laver lost his grip on the major tournaments. However, on the World Championship of Tennis (WCT) tours, he remained the leading player and by far the leading prize money winner. In 1970 he won 13 titles including the rich ‘Tennis Champions Classic’. In 1971 he defended his title, winning an astounding string of 13 straight winner-take-all-matches against top opponents. In 1971 and 1972 he was the points leader of the WCT tournament series, but lost the playoff finals to Rosewall in a match rated as one of the best of all time, drawing a TV audience of over 20 million.

Laver helped Australia win the Davis Cup four consecutive times from 1959 to 1962. In 1973, professionals were permitted to play in the Davis Cup for the first time, and Laver was on a winning team for the fifth time as Australia beat the United States 5-0. Laver beat Tom Gorman in five sets on the first day and paired with Newcombe for a crushing straight-set doubles victory over Stan Smith and Erik van Dillen that clinched the Cup. Of all the marvellous Australian Davis Cup performers he is the only one never to play in a losing series.

He was also a factor in winning three World Cups (1972, 1974, 1975) for Australia in the now disbanded team competition against the US. In 1976, as his tournament career was winding down, Laver signed with San Diego in World Team Tennis and was named the league’s Rookie of the Year at age 38!