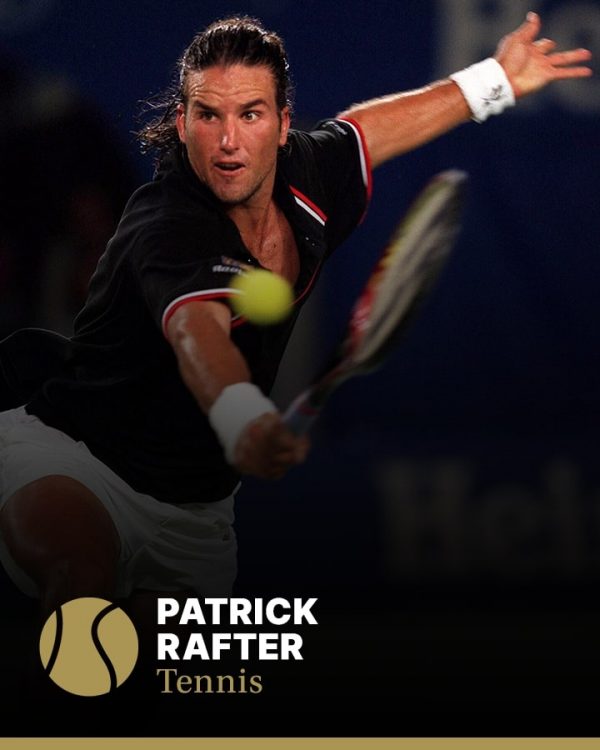 Patrick Rafter was inducted into the Sport Australia Hall of Fame in 2006 as an Athlete Member for his contribution to the sport of tennis.

The third youngest in a family of nine children, Rafter began playing tennis at the age of five with his father and three older brothers, eventually reaching the heights of international tennis in 1997 and 1998 when he won the US Open.

He and his older brother Geoff were so keen on their tennis that after Pat finished high school, they traveled all over Europe to compete in tournaments.  Eventually, Geoff noticed that Pat had a real flair for the game and stopped playing to coach his brother for a while. Pat turned professional in 1991 and eventually won his first career singles title in Manchester in 1994, displaying his now famous serve and volley style of tennis.

Known amongst his mates as “Skunky”, Rafter’s breakthorugh on the tennis scene came in 1997, beginning at the French Open, where he reached the semi-finals, falling in four sets to the eventual runner-up, Sergi Bruguera.  Later in the year at the US Open, he reached the final against Greg Rusedski (beating Andre Agassi and Michael Chang, among others, along the way) and won in four sets, 6-3 6-2 4-6 7-5, to claim his first Grand Slam title.

In 1998, he won back-to-back singles titles at the ATP Masters Series events in Canada and Cincinnati, a rare feat. (Only Andre Agassi, in 1995, and Andy Roddick, in 2003, have done the same.)

After Cincinnati, he reached the US Open final again and defeated fellow Aussie Mark Philippoussis in four sets, 6-3 3-6 6-2 6-0.  Rafter donated the prizemoney from his win to the Starlight Children’s Foundation.  The money was used to construct Queensland’s first Starlight Express Room at the Mater Hospital.  Rafter has created his own charity organisation that raises funds for children’s causes each year.

In July 1999, Rafter reached the world number one men’s singles ranking.  He held it for just one week, however, making him the shortest-reigning world number one in tour history.  However, his ranking soon thereafter plummeted, as he lost in the first round of the US Open as the two-time defending champion (and having a ton of ranking points), and then fell victim to a shoulder injury. By the time he reached the Wimbledon final in July, 2000, his ranking had fallen to number 52.

Rafter won the Australian Open men’s doubles title in 1999 (partnering Jonas Björkman).  He and Björkman also won doubles titles at the ATP Masters Series events at Indian Wells in 1998 and Canada in 1999.

In 2000, Rafter reached the men’s singles final at Wimbledon.  In the semi-finals of the tournament, he faced Andre Agassi and won in what has been called one of the most thrilling matches ever seen at Wimbledon, particularly due to the clash of different playing styles between the two men.  Rafter won in five sets, 7-5 4-6 7-5 4-6 6-3.  He then faced Pete Sampras in the final, who was gunning for a record-breaking seventh Wimbledon title overall (and seven in the past eight years), and while Rafter made a strong start to the match and took the first set, after the match he would claim that he had “choked” part way through the second set, and was not able to get back into his game.  Sampras won in four sets 7-6 6-7 4-6 2-6.

In 2001, Rafter reached the semi-finals of the Australian Open, but despite holding a two sets to one lead and having the support of the home crowd, Rafter lost the match to Andre Agassi in five sets, after succumbing to cramps so bad that he could barely run for the final two sets.  Later in the year, Rafter also made the Wimbledon final again.  Much like the previous year’s tournament, he faced Andre Agassi in the semi-finals, and won in yet another five-setter that arguably topped the drama provided by their previous year’s encounter, 2-6 6-3 3-6 6-2 8-6.  In the final, he squared off against Goran Ivanisevic, who had reached the Wimbledon final three times before but had slid down the world rankings to number 125 following injury problems.  After a titanic five-set struggle, lasting just over three hours, Ivanisevic prevailed, 6-3 3-6 6-3 2-6 9-7.

Rafter was on the Australian Davis Cup teams which lost in the final in 2000 to Spain, and 2001 to France.  Ironically, he was unable to play in the 1999 Davis Cup final – where Australia beat France to win the cup – because of injury (though he won important matches in the earlier rounds to help the team qualify).

Rafter was on the Australian teams which won the World Team Cup in 1999 and 2001 before retiring from the professional tour at the end of 2002, after winning a total of 11 singles titles and 10 doubles titles.

In 2002 he won the Australian of the Year award and was elected to the International Tennis Hall of Fame, Rhode Island, in 2006.