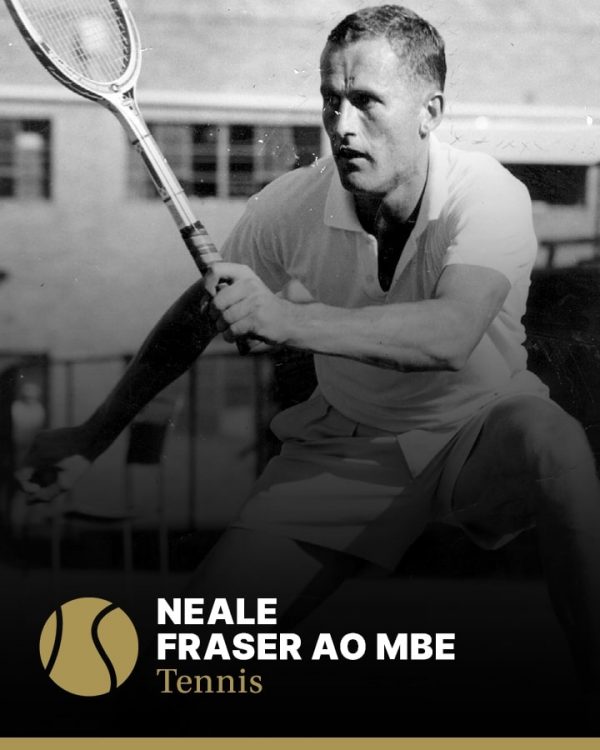 Neale Fraser AO MBE was inducted into the Sport Australia Hall of Fame in 1986 as an Athlete Member for his contribution to the sport of tennis.

A serve-bombing lefty whose onerous delivery was flat, sliced and kicked, Neale Fraser backed it up with tough volleying and was a marvellous competitor. Solidly built and athletic at 6’1″, he was especially overpowering on fast surfaces. Although he won Wimbledon in 1960 and the US title in 1959 and 1960, Fraser found team play – doubles and Davis Cup – nearest his heart. As one of eight men to win all four majors in doubles, Fraser took three Australian (1957, 1958, and 1962), French (1958, 1960, and 1962) and US (1957, 1959, and 1960) titles, and two Wimbledon (1959, and 1961) with three different partners, Ashley Cooper, Lew Hoad, and Roy Emerson. Tennis historians on either side of the equator rate Fraser and Roy Emerson as one of the best ever doubles teams.

Neale was also successful in the mixed doubles, winning the Australian in 1959, Wimbledon in 1962, and the US from 1958 to 1960. He holds the distinction of having won the US National (now Open) singles, doubles and mixed doubles titles in 1959 and then successfully defending those titles a year later. Since that time, no one has equalled that feat in a single year, let alone successively.

His toughest match of the 1960 Wimbledon championship was won literally over the dead-weary body of Butch Buchholz. But before the frustrated American keeled over with cramps in their quarterfinal, Fraser had to dodge five match points in the 30-game fourth set. It ended with winner Fraser on the short end in games, 4-6 6-3 4-6 15-15.

His most successful alliance was with Emerson for eight majors. Losing only one singles, he was a mainstay for four Australian Cup-winning sides, starting in 1959 at Forest Hills. There he won both his singles, and, with Emerson, the doubles in heisting the punchbowl from the US, 3-2. On opening day he beat Wimbledon champ Alex Olmedo. In the decisive fifth match, he beat Barry MacKay, 8-3 3-6 6-2 6-4, in a duel interrupted by rain and carried over the following afternoon.

He was ranked number one in 1959 and 1960 and was in the top ten every year between 1956 and 1962. Although he retired in 1963, he played a cameo at Wimbledon ten years later as doubles finalist (to Jimmy Connors and Ilie Nastase) with John Cooper, brother of Ashley Cooper, with whom he’d won the US doubles in 1957.

Neale also captained the Australian Federation Cup team from 1976 to 1978 helping the team to reach the final in each of these years. He was also the Section Manager – Tennis at the 1988 Seoul and 1992 Barcelona Olympic Games.

Neale was Chairman of The Sport Australia Hall of Fame from 1997 until 2005.