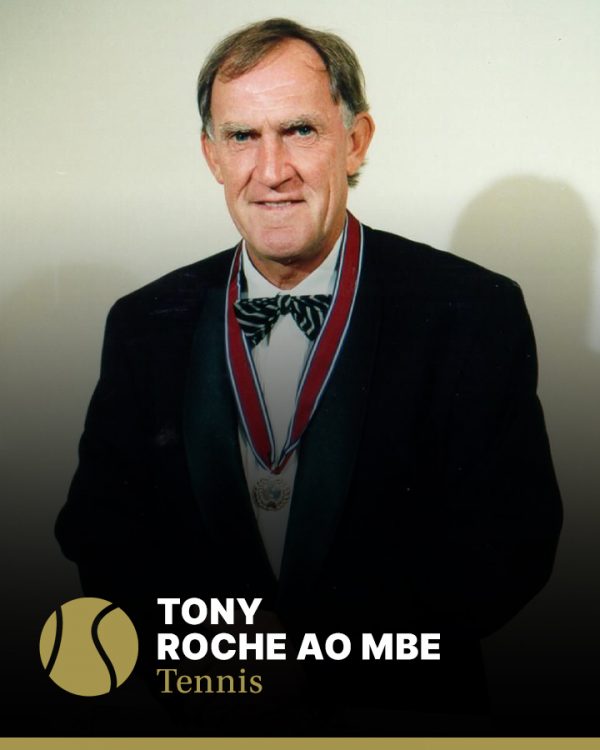 A left hander from Tarcutta, New South Wales, Tony Roche is a legend of Australian sport. As a player, Roche became one of the world’s best, achieving a ranking of world number two behind Rod Laver in 1969. He was in the world top ten from 1965 to 1970, in a career which spanned the amateur and open eras of world tennis.

However, Roche’s singles career was hampered by a chronic elbow injury, which required three operations, and was finally overcome by the efforts of a Filipino faith healer in 1973. Many tennis experts feel that Roche would have been the world’s number one during his time in the game, if not for his elbow injury.

Roche’s career highlights on the international stage included winning the Italian and French Championships -the ‘Continental Double’ – in 1966, as well as being runner-up at the US Open in 1969 and 1970, and at Wimbledon in 1968 -the year in which he turned professional.

Throughout his career, Roche represented Australia on four winning Davis Cup teams. The Davis Cup competition represented some of his greatest triumphs. In 1965 and 1967, alongside Newcombe, he took Australia to victory over Spain and in 1966 over India. In 1977, he was recalled for singles duties in the Davis Cup tournament against Italy in Sydney, and won against Adriano Panatta on the opening day to help take Australia to a 3-1 victory.

After retiring from professional tennis, Roche turned to coaching with amazing success. In World Team Tennis, he was a player-coach for Phoenix and Boston. He coached Tracy Austin, Ivan Lendl and Pat Rafter, taking them all to world number one rankings. Roche also coached the Australian Davis Cup team throughout the 1990s, and was responsible for working with Pat Rafter, Lleyton Hewitt, Mark Philippoussis, Mark Woodforde and Todd Woodbridge, amongst others, in an era which culminated in Australia’s 1999 Davis Cup win.

Today, Roche works extensively with Australian juniors, and is helping to bring the country’s next big stars through the ranks. He is constantly sought by many of the games superstars to work with them full time, including current world number one – the seemingly unbeatable Roger Federer.

Tony Roche was made a Member of the Order of the British Empire (MBE) 1981, and became an Officer of the Order of Australia (AO) in 2001. He was inducted into the International Tennis Hall of Fame in Newport, Rhode Island, in 1986. This, fittingly, was alongside John Newcombe.