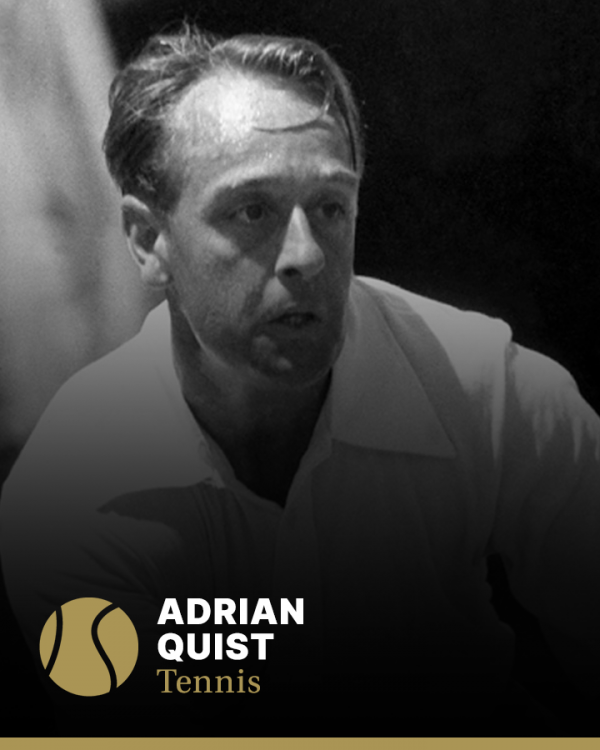 Adrian Quist is remembered as one of Australia’s legendary doubles tennis players, and that luminous reputation sometimes obscures the fact that he was a brilliant singles player as well. He won the Australian singles championships in 1936, 1940 and 1948, and was a finalist in 1939. Quist first appeared in the world top ten in 1936 at number four. He was number six in 1938 and number three in 1939.

It seemed fitting that the two old comrades (Quist and Brom) who wreaked so much damage together should meet in the last Australian singles final with a pre-war flavor, 1948, before the kids led by Frank Sedgman took over. Quist scraped to hold onto serve to 3-3 in the fifth then won the last three games from Brom.

Quist enjoyed the distinction of having been the only man ever to share in winning ten national doubles championships. He won the Australian title with Don Turnbull in 1936 and 1937, and continued unbeaten for another eight years with Brom from 1938 to 1950 (including a gap in the war years when the competition was suspended).

He represented Australia in Davis Cup tennis from 1933 to 1939, and again in 1946 and 1948 and he is remembered mainly for two remarkable performances. In the North American zone in 1936, he beat Willmer Allison in the singles, and with Crawford, beat the great Don Budge and Gene Mako in doubles, after trailing two sets to love.

In 1939, Quist and Brom registered a unique triumph in lifting the Davis Cup from the US. Losing their singles the first day in Philadelphia (Quist to Frank Parker, 7-5 in the fifth), they began the unparalleled comeback by beating Jack Kramer and Joe Hunt in a four-set doubles, even though they lost the first set and trailed 1-3 in the third. Hunt led 3-2, 30-15 on serve in the third when the turnabout began. Quist, a short (5ft 6in), bouncy right-hander with an all-court game and telling volleys, hung on after losing the third and fourth sets in the singles to beat Wimbledon champ Bobby Riggs, 6-1 6-4 3-6 3-6 6-4, even though Riggs saved a match point at 5-2 and reached 4-5. Brom beat Frank Parker in a ground stroking duel to clinch it in the fifth rubber enabling Australia to regain the Cup after a lapse of 20 years.

He was inducted into the International Tennis Hall of Fame in 1984.