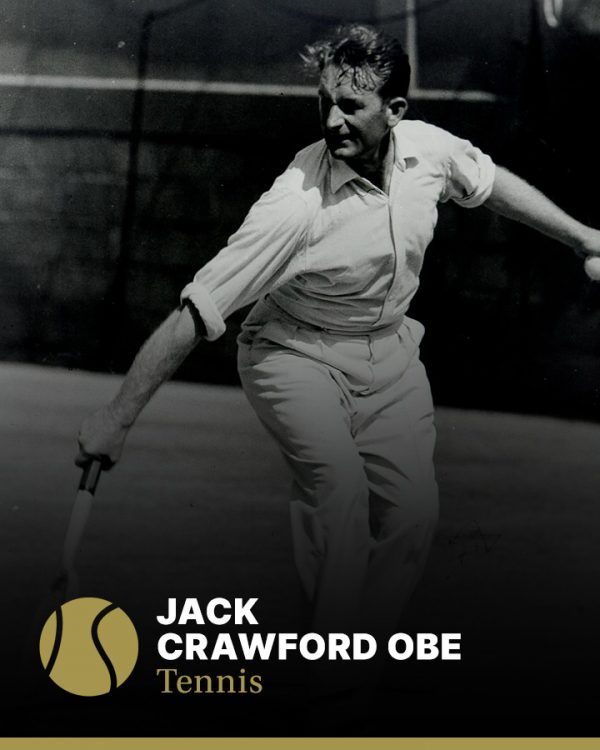 Few players so completely won the gallery as did John Herbert Crawford, called by one commentator the “most popular Wimbledon winner in history.”

Indeed, Crawford, a right-hander, was an exemplary sportsman, as well as a handsome figure on the court in his long, white flannels and long-sleeved shirt. He moved easily over the turf with his flat-topped racket, a model of early vintage. He was in the world top ten six times, from 1932 to 1937, and was number one in 1933.

Crawford was a masterful player from the back of the court, driving the ball with length and pinpoint control, with seemingly little strain. He played the classical game of solid, fluent strokes, and he played it so well that he came within one set of completing a Grand Slam five years before Don Budge accomplished the feat.

Crawford’s bid came in 1933, starting with a victory over Keith Gledhill, 2-6 7-5 6-3 6-2, in the Australian final. Next Crawford won the French championship, beating Henri Cochet, 8-6 6-1 6-3 for the title. At Wimbledon came a legendary final against Ellsworth Vines that Crawford won, 4-6 11-9 6-2 2-6 6-4. Crawford was a 5-to-1 short-ender with London bookies, however Vines powered to a 6-4 first set win and looked certain to forge to a fairly easy victory. But Crawford changed his tactics, began rushing the net, and won the second 11-9. Crawford completely outplayed Vines in the third set to win 6-2 and then Vines came back to win the fourth 6-2. Crawford finally took out his one and only singles at Wimbledon with a spellbinding 6-4 win in the final set.

So a reluctant, fatigued Crawford moved on to Forest Hills and the US championships with an opportunity to complete the ultimate sweep. An asthmatic who suffered in the muggy summer heat of Long Island, he defeated Frank Shields in the semi-finals, then faced Fred Perry, the last obstacle in his path. Crawford lost the first set, but then won the next two and was one set away from the Slam. But his strength faded, owing in part to the asthma and insomnia he had at the time. Perry went on to victory in the next two sets, dashing Crawford’s hopes, 6-3 11-13 4-6 6-0 6-1.

Still, the gallery loved this man, “Gentleman Jack,” they called him. Seemingly never hurried, his every move appeared effortless, his serve belonging in a picture book. Jack Crawford was one of the greats of his time while playing tennis in the style of a gentleman of the old school.

When he beat Perry to win the 1935 Australian title, Jack was taking part in his eighth straight major final (he didn’t enter the US in 1934), displaying extraordinary consistency. Crawford’s seventh Aussie singles final, a record later tied by Roy Emerson, was lost in 1940 to Adrian Quist, but, at 32, he did knock off defending champ John Bromwich in the semi-final.

Crawford’s classic style was widely copied and became known as the Australian style, which survived until the 1970s when the Borg top spin came into vogue.