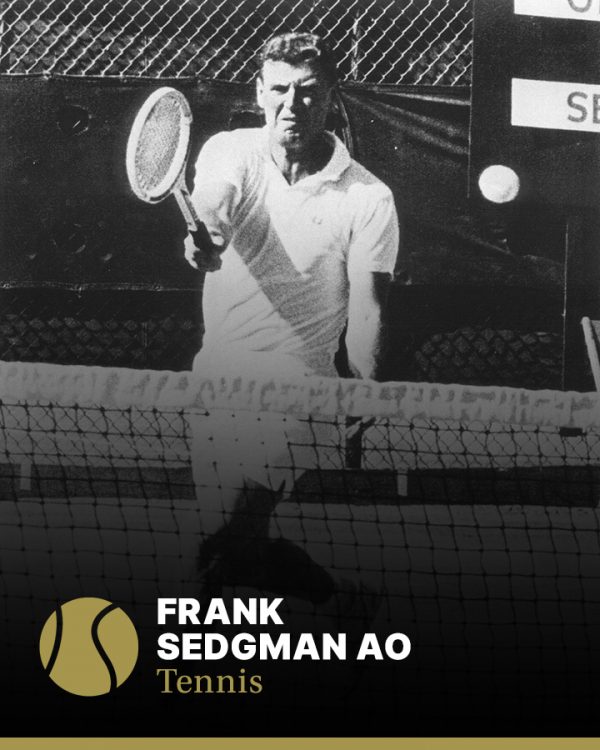 Frank Sedgman AO was inducted into the Sport Australia Hall of Fame in 1985 as an Athlete Member for his contribution to the sport of tennis.

Sedgman was Australia’s first post-war Wimbledon champion and the first Australian to win the US singles title. Even as an amateur, he was arguably the world number one player in 1951 and 1952. In his 1979 autobiography Jack Kramer, the long-time tennis promoter and great player himself, included Sedgman in his list of the 21 greatest players of all time.

Sedgman was an extremely fast right-hander known for his fitness who played the serve-and-volley game that had just been popularised by Kramer. He was one of a number of Australian players who used the continental grip in which the racquet is held the same way for both the forehand and the backhand. He was particularly known for his volleying and speed at the net. He was also extremely graceful in his footwork and strokes, with a classical style that was a model to other players for many years.

Sedgman, writes Kramer, “was the quickest I’ve ever seen. He could attack off his second serve, or he could come in behind his little slice backhand — and once Sedg got to the net, forget it, because he was so quick you had to thread a needle to get anything past him. Anything he could get he would put away. Frank Sedgman hardly ever hit a second volley. If he got his racquet on a volley, it was almost always a placement, deep and hard.”

Sedgman played a very important role in Australia’s resurgence as a Davis Cup nation. His record is impressive, winning 16 out of 19 singles matches and all nine of his doubles matches between 1949 and 1952. Australian talent was declining after World War II, losing four successive finals to the US. Then, in 1950, 22-year-old Sedgman – loser of both his singles the previous year – startled crowds at Forest Hills by beating Tom Brown and Ted Schroeder in the singles and joined with John Bromwich for the doubles win to spearhead a 4-1 victory for the Aussies.

Not since 1911 (Sir Norman Brookes) had an Aussie won three matches in a Cup triumph. In the company of Ken McGregor in 1950, Mervyn Rose and McGregor in 1951, and McGregor again in 1952, Sedgman led the way to three straight Cups. Those Cup successes were the start of captain Harry Hopman’s second stewardship under which Australia won the Davis Cup 15 times between 1950 and 1967.

In a four-year span from 1949 through to 1952, Sedgman won 22 Grand Slam titles in singles (five), doubles (nine), and mixed doubles (eight), three fewer than John Newcombe and six fewer than Roy Emerson won over longer periods of time.

Sedgman, noted as a particularly good doubles player, won the doubles Grand Slam in 1951 with McGregor, the only male team to do so. They dethroned Bromwich and Adrian Quist, considered unbeatable after eight straight Australian doubles titles. The following year Sedg and McGregor won the first three majors, then, at Forest Hills, were upset by Rose and American Vic Seixas, denying them eight consecutive Grand Slam victories. Sedg had eight titles in a row, having taken the US with Bromwich in 1950.

In 1949 Sedgman played Bromwich in the singles final of the Australian championships, played at Memorial Drive, Adelaide, where they had to contend with an infestation of grasshoppers. The insects were everywhere making it difficult to get to the net, however Sedgman won his first major singles title 6-3 6-3 6-2. He won again the following year when he beat McGregor in four sets at Kooyong.

In 1952, his last season as an amateur, Sedgman was the last man to make a rare Wimbledon triple, adding the mixed (with Doris Hart) and the singles championships to his doubles victory. He also won the Wimbledon doubles in 1948 and the mixed in 1951.

In late 1952 Sedgman was tempted to turn professional. Hopman, however, led a fund-raising drive via his newspaper column in the ‘Melbourne Herald’ to keep Sedgman an amateur. Enough money was raised to purchase a gasoline station in the name of Sedgman’s future bride. Sedgman remained an amateur for another year but finally turned professional in 1953, when Kramer, proprietor of the professional tour and its foremost player, enticed Sedgman to become his challenger in 1953. They played the customary head-to-head tour with Kramer remaining on top 54-41. However, Sedgman’s share of the gate was $102,000, and he was the first male player to earn more than $100,000 in a season.

Keeping himself unusually fit, he was able to launch a second professional career in 1974 when promoter Al Bunis formed the Grand Masters tour for ex-champs over 45. Sedgman won the Grand Masters championship in a season’s-end playoff among the top eight players in 1975, 1977 and 1978, and in this second phase of professionalism won more than $250,000 over six seasons.