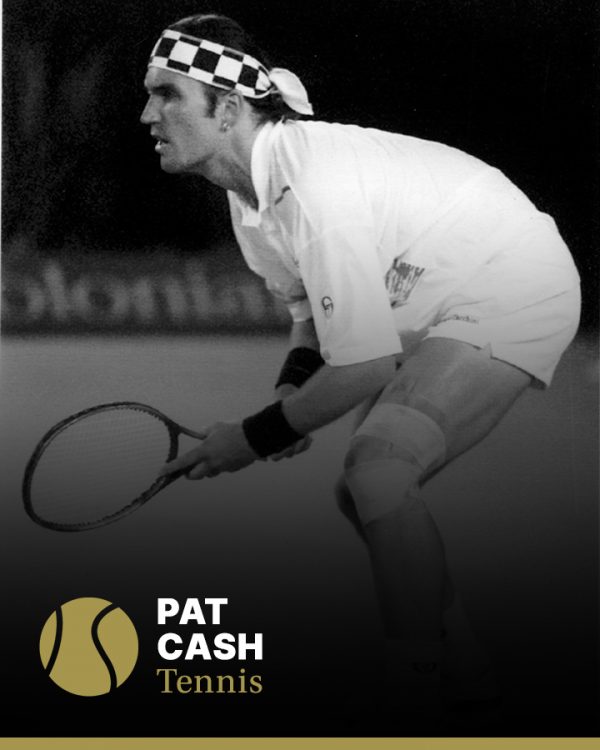 Pat Cash was inducted into the Sport Australia Hall of Fame in 2005 as an Athlete Member for his contribution to the sport of tennis.

Cash first came to the tennis world’s attention as a brilliant junior player in the early 1980s. He was ranked the top junior player in the world in 1981, and in 1982 he won the Wimbledon and US Open junior titles. He went on to career-high world rankings of world no. 4 in singles in 1988 and world no. 6 in doubles.

Cash turned professional in 1982 and won his first top-level singles title that year in Melbourne. Cash established a reputation on the tour as a hard-fighting serve and volleyer, and for wearing his trademark black-and-white checked headband.

In 1983, Cash became the youngest player to play in a Davis Cup final. He won the decisive singles rubber against Joakim Nyström as Australia defeated Sweden 3-2 to claim the Cup. In 1984, Cash reached the men’s singles semi-finals at both Wimbledon and the US Open. He lost in three sets in the Wimbledon semi-finals to John McEnroe, and was defeated in a thrilling five-set semi-final at the US Open by Ivan Lendl who claimed the fifth set in a tie-breaker.

Cash was runner-up in the men’s doubles competition at Wimbledon in both 1984 and 1985. In 1986, Cash again helped Australia win the Davis Cup, beating the Swedes 3-2 in the final. Cash again won the decisive singles rubber, coming back from two sets down against Mikael Pernfors to win in five sets.

In 1987, Cash reached his first Grand Slam singles final at the Australian Open, where he lost a tight five-setter, 6-3 6-4 3-6 5-7 6-3, to Stefan Edberg in the last Australian Open final to be played on grass courts at Kooyong.

The crowning moment of Cash’s career came at Wimbledon in 1987. Having beaten Mats Wilander in the quarter-finals and Jimmy Connors in the semi-finals, Cash moved through to the final where he faced the world no. 1 Ivan Lendl. Cash seized his moment and beat Lendl in straight-sets 7-6 6-2 7-5. Cash famously sealed a memorable victory by climbing into the stands and up to the player’s box at Centre Court, where he celebrated with his family, girlfriend and coach. In doing so, he started a Wimbledon tradition which has been copied by many other champions in the years that followed.

In 1988, Cash reached the Australian Open final for the second consecutive year and faced another Swede, Mats Wilander. It was the first men’s singles final to be played at the new Flinders Park venue, and Wilander won in an epic five-set, four-and-a-half-hour encounter 6-3 6-7 3-6 6-1 8-6.

Cash played in his third Davis Cup final in 1990. This time Australia lost 3-2 in the final to the United States.

Cash continued to play on the circuit on-and-off through to the mid-1990s. But a series of injuries to his achilles’ tendon, knees and back meant that he was never really able to recapture his best form after his triumphant year in 1987. He won his last top-level singles title in 1990 in Hong Kong. His last doubles title came in 1996 at Pinehurst.

Since his retirement from the tour, Cash has coached top players including Greg Rusedski and Mark Philippoussis. He has also worked as a TV commentator.