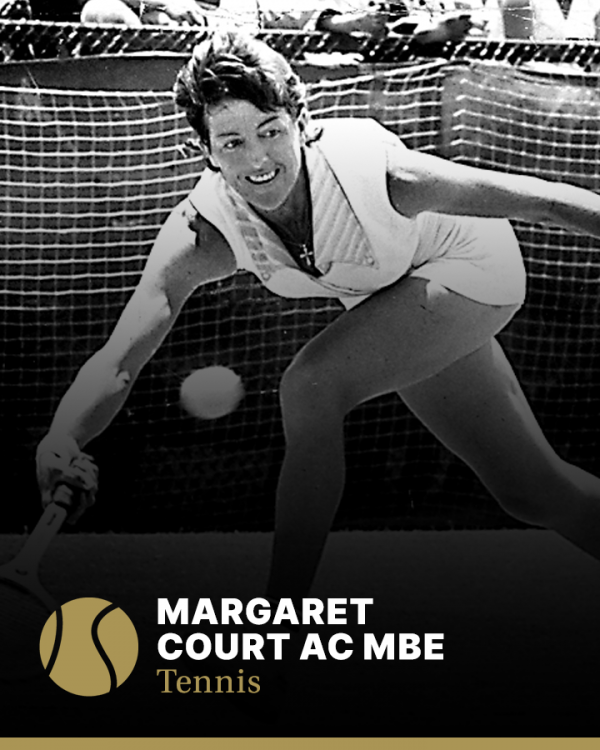 Margaret Court (nee Smith) was inducted into the Sport Australia Hall of Fame in 1985 as an Athlete Member for her contribution to the sport of tennis and was elevated to Legend of Australian Sport in 1998.

Court is widely considered to be one of the greatest tennis players in the history of the game. Between 1960 and 1975, she won a record 62 Grand Slam titles – 24 singles, 19 women’s doubles and 19 mixed doubles. In 1970, she became only the second female player to win all four Grand Slam singles titles in a year. Maureen Connolly in 1953 and Steffi Graf in 1988 are the only other women to have achieved this. During her tennis career she was ranked number one in the world seven times.

She is one of only three players to have achieved a career ‘box set’ of Grand Slam titles, i.e. winning every possible Grand Slam title – singles, doubles and mixed doubles – at all four of the Grand Slam events. The others are Doris Hart and Martina Navratilova.

Court grew up in Albury on the border of New South Wales and Victoria and began playing tennis at the age of eight. As a teenager she went to Melbourne to develop her tennis career under the guidance of another Australian tennis great, Frank Sedgman, and trainer Stan Nicholes.

Court was ordained a minister and founded the Margaret Court Ministries in 1991. The Victory Life Centre (Perth) was established in 1995, and is now linked to 25 churches in Australia.

In 1967, Court became a Member of the British Empire (MBE) for her services to sport and international relations. In 2007, Court was made an Officer of the Order of Australia (AO) for service to tennis as a player, as a mentor to junior female elite competitors and through professional development programs; and to the communities of Australia and Sri Lanka as the initiator of a range of pastoral care, social support and emergency accommodation projects. In 2021 Court was made a Companion of the Order of Australia (AC) for eminent service to tennis as an internationally acclaimed player and record holder and grand slam champion, and as a mentor of young sportspersons.

On the eve of the 2003 Australian Open Tennis Championship, Melbourne Park’s Show Court One was officially re-named Margaret Court Arena as a tribute to her outstanding career.

In 2006, Court was recognised by the International Tennis Federation for her outstanding tennis achievements. She was presented with the Phillipe Chatrier award at the ITF’s world champions dinner in Paris during the French Open. She is only the 11th recipient of the award.

In 2011 Court was named among the inaugural inductees into the Western Australia Women’s Hall of Fame.