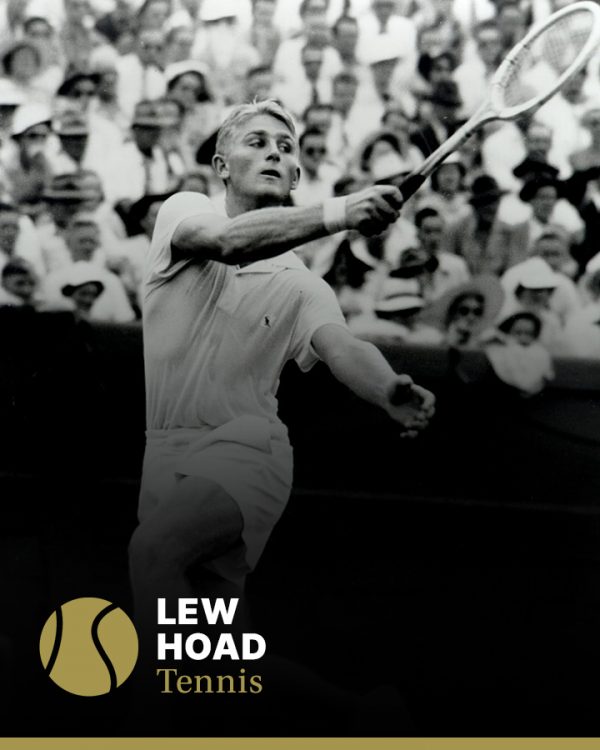 Lewis Alan “Lew” Hoad, was a champion tennis player. For five straight years, beginning in 1952, he was ranked in the world top ten for amateurs, reaching the number one spot in 1956. Lew won 13 major titles in singles and doubles.

Hoad, with a gorilla chest and iron wrists, may have been the strongest man to play tennis in the world class. With his movie-star good looks, powerful physique, and outgoing personality, Hoad became a tennis icon in the 1950s. As Jack Kramer said, “Everybody loved Hoad, even Pancho Gonzales”.

Strength played an important part of Hoad’s game, as he often drove for winners rather than rallying and waiting for the right opportunity. Although he assaulted his opponents, he also had the skill to win the French Championships in 1956 on the slower clay court. According to Kramer, “Hoad had the loosest game of any good kid I ever saw. There was absolutely no pattern to his game…. He was the only player I ever saw who could stand six or seven feet behind the baseline and snap the ball back hard, crosscourt. He’d try for winners off everything, off great serves, off tricky short balls, off low volleys. He hit hard overspin drives, and there was no way you could ever get him to temporise on important points.” It was a flamboyant style, and made for some bad errors when he wasn’t in tune. But when his power was focused along with his concentration, Hoad was a formidable opponent.

The right-handed Hoad was bracketed with Rosewall throughout his amateur days. Although entirely different in stature, style, and personality, the two were called Australia’s tennis twins, the prodigies drew attention as teenagers and were rivals and teammates through the 50s. The pair’s first major titles came in 1953, when they won the Australian, French, and Wimbledon doubles. They missed out on a grand slam on the last leg, the US at Longwood, in a quarter-final upset by unseeded Americans Straight Clark and Hal Burrows, 5-7 14-12 18-16 9-7.

In 1956 Hoad won the first three stages of the singles Grand Slam and was heavily favored to win the fourth and then turn professional for a lucrative contract offered by promoter Jack Kramer. His Wimbledon final victory over Rosewall meant he was three quarters of the way to a Slam. Yet it was Rosewall who stood as the immovable obstacle in the final at Forest Hills, spoiling Hoad’s Slam with a 4-6 6-2 6-2 6-3, triumph. However, that same year, and partnered with Rosewall, he won the doubles Grand Slam in tennis.

Despite losing out on a Grand Slam, his 1956 season was a luminous hard-working campaign that netted 32 titles: 15 victories in 26 singles tournaments with a 95-11 match record, 17 victories in 23 doubles starts with a 79-5 match record.

He decided to try for the Slam again the next year, 1957. That dream was drilled almost immediately in the semis of the Australian Championships by Neale Fraser, 7-5 3-6 6-1 6-4. Then another Aussie, Neil Gibson, lulled him to defeat in the third round of the French, 2-6 3-6 6-4 6-4 6-4. Though Lew resolutely and smashingly won his second straight Wimbledon title by blasting fellow Aussie Ashley Cooper in the final, 6-2 6-1 6-2, he felt it was time to cash in. He accepted an offer from promoter Jack Kramer and began preparing for Gonzales. Hoad (5 attempts) and Bjorn Borg (10) are probably the two greatest players not to win the US Open.

His first year as a pro was a series of head-to-head matches with the reigning king of professional tennis, Pancho Gonzales. Hoad won 18 of the first 27 matches, but when Hoad’s troublesome back gave way during the winter of 1958, Gonzales surged back to finally defeat Hoad by 51 matches to 36. It was Pancho’s closest brush with defeat after taking over leadership in 1954. Gonzales, whom some consider to be the greatest tennis player of all time, always maintained that Hoad was the toughest, most skillful adversary that he had ever faced. “He was the only guy who, if I was playing my best tennis, could still beat me,” said Gonzales in a 1995 New York Times interview. “I think his game was the best game ever. Better than mine. He was capable of making more shots than anybody. His two volleys were great. His overhead was enormous. He had the most natural tennis mind with the most natural tennis physique.”

Hoad was a member of the Australian Davis Cup team that between 1952 and 1956 won the Davis Cup four times. He is often remembered for his triumph in 1953 over Tony Trabert on a rainy Melbourne afternoon. At 19, he and Rosewall had been selected to defend the Cup. The US led, 2-1, in the final and seemed about to clinch the Cup when the more experienced Trabert, already the US champion, caught up at two sets all. Hoad hung on to win, however, 13-11 6-3 3-6 2-6 7-5, and Rosewall beat Vic Seixas the following day to save the Cup, 3-2. Although they lost it to the Americans in 1954, Hoad and Rosewall were awesome in 1955, reclaiming the prize, 5-0, and defended the Davis Cup for the last time together in 1956.

Hoad’s back problems cut his career short in the mid-1960s while Rosewall, whose style was less taxing, kept on going into the next decade.

In retirement, Hoad moved to Fuengirola, Spain, near Málaga, where he and his tennis-playing wife, Jenny Staley, operated a tennis resort for more than 30 years. Lew was battling leukemia and waiting for a bone marrow donor when in his weakened condition, he died of a heart attack in 1994 at the age of 59.