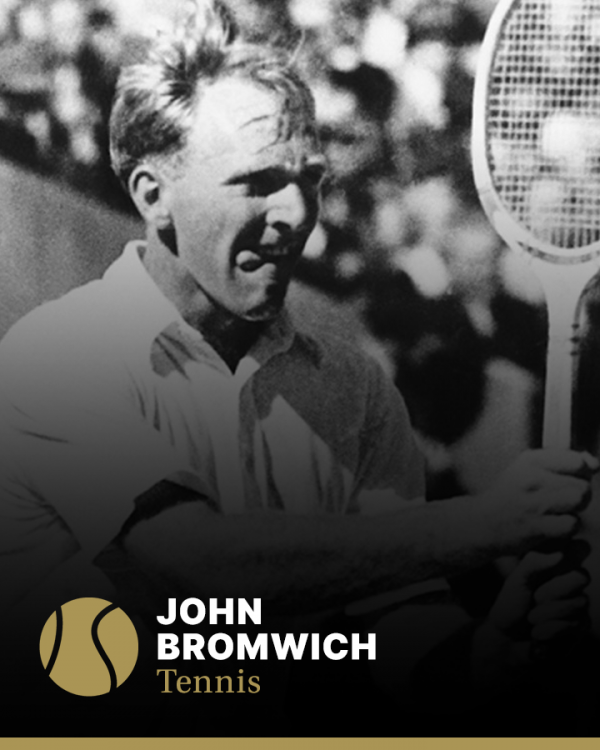 Although John Bromwich’s record as a singles player was superb, it was as a doubles player that he achieved his most enduring stature. Some claim he was the greatest the world had seen.

A loping, big-jawed man, with an unruly shock of blond hair, Bromwich was one of the most curious stylists in the game’s history. A natural left hander, he nevertheless served right handed, stroked with two hands on his right side and one, the left on his left side. Using a loosely-strung racket, he had superb touch and chipped maddeningly at his opponents shoe tops.

He represented Australia in the Davis Cup from 1937 to 1939, then 1946 and 1947, and 1949 and 1950. In 1939, Quist and Brom were sure they’d win because they’d only lost 3-2 the year before, and the great Don Budge from the US had turned pro. It took them three weeks by boat to California, then a train to Philadelphia. War had been declared just before the matches began. Brom and Quist were triumphant in 1939, rebounding from 0-2 down against the Cup-holding US in Philadelphia to win. They began turning it around with a 5-7 6-2 7-5 6-2 doubles victory over Joe Hunt and Jack Kramer, and Bromwich clinched the Cup in the decisive fifth match, 6-0 6-3 6-1, over Parker. This was the first ‘Australian’ victory, after the Australasia years.

Ranked in the world top ten on both sides of the war, Brom, Quist and Parker were the only ones of such longevity – Brom made the list in 1938, 1939, 1946, 1947 and 1948, coming back splendidly after army service in which he was wounded and contracted malaria in the New Guinea campaign.