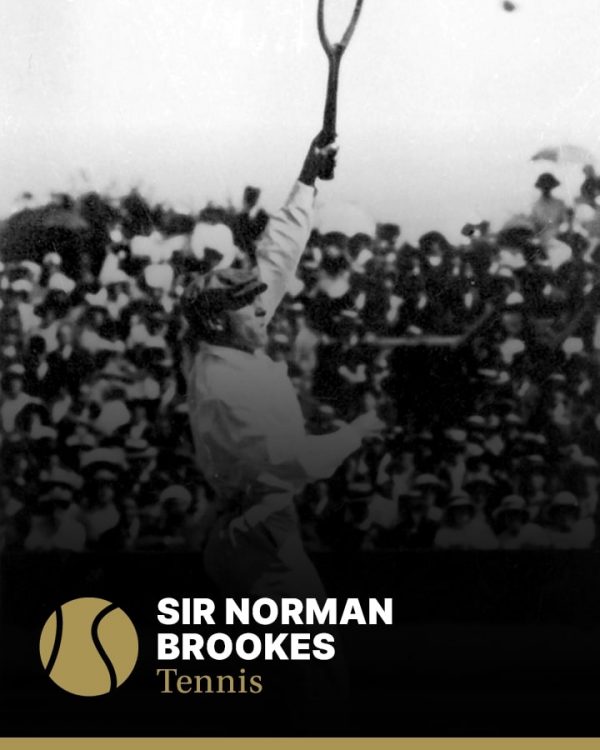 Sir Norman Brookes, otherwise known as ‘The Wizard’ is best remembered for becoming the first player from overseas and the first left-hander to win the Wimbledon championships. He was a member of nine Australasian Davis Cup teams (playing 39 matches) between 1905 and 1920, helping Australasia to win the Cup six times. He was one of the great pioneers of Australian tennis.

From an early age, Brookes showed a precocious aptitude for all ball games. At school he excelled at cricket, football and lawn tennis. Later he took up golf and won the Victorian foursomes championship once and the Australian twice. His great enthusiasm, however, was tennis and he devoted much of his time to improving his game. The family had its own court where he could play regularly; near by, he could study the strokes and tactics of leading players; and he received valuable coaching from Dr W. V. Eaves. Moreover, he had the means to go to Europe and play in tournaments there.

He won his first tournament at 14 while a schoolboy at Melbourne Grammar and in 1896 was selected to represent Victoria against New South Wales. At this stage he was a fierce hitter and a baseliner. By the time he made his first journey to Wimbledon in 1905, he had changed his style of play to the controlled speed of ground shots and the aggressive net-attack that were to take him to the top. At Wimbledon in 1905 he won the all-comers’ event but lost his challenge to the title-holder H. L. ‘Laurie’ Doherty. That year he and New Zealander Anthony Wilding challenged for Australasia in the Davis Cup; lacking experience, they were eliminated early.

On his second visit to Wimbledon, in 1907, Brookes won the singles, doubles (with Wilding) and mixed events. He was the first player from overseas and the first left-hander to win the world title. That year Brooks and Wilding captured the Davis Cup from Great Britain with Brookes decisive 6-2, 6-0, 6-3 win over Roper Barrett settling Australasia’s 3-2 victory at Wimbledon to break Britain’s four-year hold on the Davis Cup and take the prize Down Under for the first time. Their remarkable partnership enabled Australasia to retain it in 1908, 1909 and 1911 (there was no challenge in 1910) and gave tremendous stimulus to tennis in Australia. Britain eventually won the Cup back in 1912.

He was personally a major figure in establishing the Australian Open (known as the Australasian Championship until 1927) which he won in 1911.

Returning to Wimbledon in 1914, his first appearance since winning seven years before, Brookes again demonstrated his all-around strength in a severe all-comers final test (6-2 6-1 5-7 4-6 8-6, over German Otton Froitzheim) preparatory to wresting the title from his close friend and teammate, Wilding, 6-4 6-4 7-5, with a display of faultless ground strokes. Brookes’ durability was demonstrated again in 1924 at Wimbledon when, at 46, he ousted world number five Frank Hunter, finalist in 1923 and 17 years his junior.

Wilding enlisted and was killed in France in May 1915. Brookes, who suffered from stomach ulcers, was rejected for active service. He became a commissioner for the Australian branch of the British Red Cross in Egypt from August 1915 to late 1916; he resigned in January 1917 and in May became commissioner for the British Red Cross in Mesopotamia. Soon after, he was appointed assistant director of local resources for the British Expeditionary Force there, with the rank of lieutenant-colonel. He was decorated with the French Legion of Honor for his services in World War I.

After the war Brookes represented Australasia in Davis Cup matches in 1919 and 1920. At 41 years of age, he won the doubles with Gerald Patterson as the Aussies beat Britain, 4-1 in 1919. A year after that, his Cup swan song, he gave Big Bill Tilden a furious battle, 10-8 6-4 1-6 6-4, as the Americans retrieved the sterling bowl. Brookes record in Davis Cup is impressive, with a ratio of 5-1 in singles and 3-0 in doubles as his side beat the US three times.

Over the years he had won innumerable championships in Australia, Europe and the United States. World rankings were instituted after his best days, but he was in the top ten in 1914, 1919 and 1920, the last at 43 years of age.

Known as ‘The Wizard’, Brookes was a master strategist and a shrewd tactician. Spare in build, his stamina sometimes failed in long matches, but he played with rare determination and concentration. Always immaculately dressed, he wore long-sleeved shirts and a peaked tweed cap and for many years used a heavy flat-top racquet with slack strings.

He was an exponent of the serve and volley game, the “big game” that was supposed to have originated after World War II. Brookes played that type of game in 1914, but he had more than a serve and volley. His ground strokes, produced with a minimum of back-swing, were accurate and powerful and he could hold his own from the back of the court. Because his serve was so big an asset – flat, slice, twist, even reverse twist–and he volleyed so much, his methods were characterised as unorthodox when he was in his prime. He often used the same side of the racket for forehand and backhand. He had phenomenal delicacy of touch and control of angled shots.

The trophy for men’s singles at the Australian Open is named in his honour. He was inducted into the International Tennis Hall of Fame in 1977. In recognition of his distinguished services to tennis he was knighted in 1939.